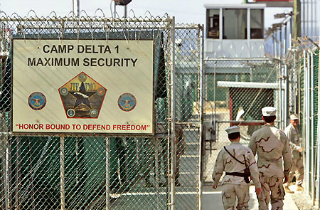 Remember several weeks ago when we took a look at all the wonderful civil liberties promises the Democrats made in their 2008 platform, back when hope was coursing through everyone’s veins and the era of George W. Bush‘s post-9/11 war-fest had supposedly come to a close? And remember how the party has clearly failed to follow through on nearly all those promises?

Looks like the Democrats want you to forget those promises ever happened.

Based on their 2012 platform, it seems they would prefer we forget they ever made such overtures towards pesky things like “protecting civil liberties” and “closing the detention center at Guantánamo Bay.”

Mother Jones reports that the party that was once eager to paint itself as leading the fight to end the post-9/11 national security state has now largely retreated from its promises, with several planks of the civil liberties platform being entirely erased from the record.

On indefinite detention, in 2008 the Democrats wrote: “We will not ship away prisoners in the dead of night to be tortured in far-off countries, or detain without trial or charge prisoners who can and should be brought to justice for their crimes, or maintain a network of secret prisons to jail people beyond the reach of the law. We will respect the time-honored principle of habeas corpus.”

But in 2012, the platform says nothing about it. That’s not surprising, given how the Obama administration has continued the practice and even signed the National Defense Authorization which gave his executive branch the right to indefinite detention.

And remember the PATRIOT Act, that knee-jerk post-9/11 civil liberties trainwreck that liberals cited for eight years as a prime example of Bush’s malfeasance? In 2008, the Democrats were gung-ho about reforming the law and protecting civilians from its abuses: “We support constitutional protections and judicial oversight on any surveillance program involving Americans. […] We reject illegal wiretapping of American citizens, wherever they live. We reject the use of national security letters to spy on citizens who are not suspected of a crime. […] We will revisit the Patriot Act and overturn unconstitutional executive decisions issued during the past eight years.”

Since then, President Obama signed a PATRIOT Act extension, which Sen. Patrick Leahy (D-VT) lamented “does not include a single improvement or reform.” And now the 2012 DNC platform says… nothing. Taken literally, the platform indicates the Democrats no longer have a problem with illegal surveillance and executive overreach now that they are in power.

In 2008, the party platform promised to close the detention camp in Guantánamo Bay, or as they called it, “the location of so many of the worst constitutional abuses in recent years.” But as everyone now knows, that promise has not been delivered.

So what do the Dems say about Gitmo in 2012? “We remain committed to working with all branches of government to close the prison altogether because it is inconsistent with our national security interests and our values.” So basically: “Most of our party voted against funding to close it, but we are definitely working to get it closed!”

And what about the use of torture? In 2008, the party was terse in their position: “We reject torture,” the platform read.

Today the platform contains a meek passage that tip-toes its way to justifying the administration’s policies: “Advancing our interests may involve new actions and policies to confront threats like terrorism, but the President and the Democratic Party believe these practices must always be in line with our Constitution, preserve our people’s privacy and civil liberties, and withstand the checks and balances that have served us so well. That is why the President banned torture without exception in his first week in office.”

But as Mother Jones‘ Adam Serwer notes: “Despite Obama’s executive order banning torture, Americans who allege they have been detained abroad by foreign governments at the United States’ request say they have been abused while in custody. It does not appear as though anyone will face charges over the Bush administration’s torture program.”

Of course, the Democrats could have saved themselves from all this criticism if only they had made those 2008 civil liberties promises with a disclaimer at the end: “…Unless there’s a Democrat in the White House.”