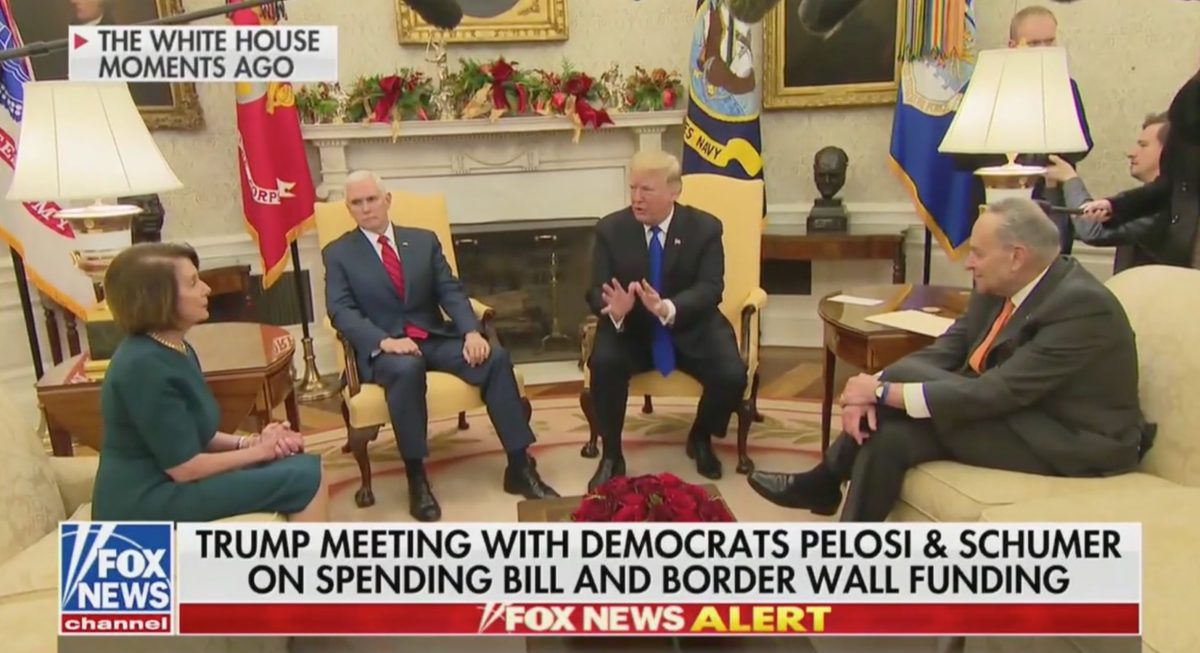 The president met with the two Congressional Democratic leaders to discuss a new government spending package and possible funding for Trump’s Southern border wall. But the conversation became free for all as the three took shots at each other, bickered over the divided state of the government, and argued whether the wall is actually conducive to border security and not just a Trump campaign vanity project.

Some people were agape as they watched Trump promise to take responsibility for a government shutdown if he and Congress cannot reach an agreement on the wall.

The Christmas Prince never had a government shutdown

In the oval @NancyPelosi warns of a “trump shutdown” and sets @realDonaldTrump off. This is must see tv.

Going to be really hard to blame the shutdown on Democrats now…https://t.co/QBNUiPAMrp

Trump promised the American people that Mexico would pay for his wall. Now he’s willing to trigger a Christmas shut down because he can’t get his way. Childish. #TrumpShutdown pic.twitter.com/TDbPg0enVK

And then, there were people who were just struck as they watched the entire conversation plunge into chaos.

When you put an entitled, overgrown adolescent into the Oval Office with no understanding of how to negotiate a deal beyond yelling and threatening, you get what we just had in that pool spray.

What a freaking circus.

Honestly makes me say it: The most statesman-like person in charge in that WH disaster was Pelosi. Second place to Schumer for baiting Trump into owning a shutdown. Honorable mention to Pence for willing himself to blend in with the furniture.

In case you missed it, here's a live look at the Oval Office meeting between Trump, Chuck and Nancy…. pic.twitter.com/zuQK1nthE6

They never have bickering fights like this in Wakanda.

I'm watching Trump, Pelosi, and Schumer bicker about the budget and the wall. This spectacle is beneath the dignity of this country.