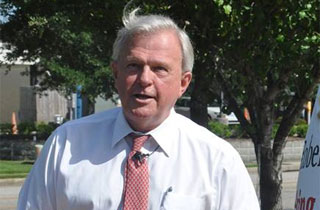 Journalists getting cussed out by politicians is nothing new, but in this case, a talk radio host felt compelled to file a police report against Alabama Democratic gubernatorial candidate Parker Griffith after he allegedly threatened him after a radio interview.

“By the way, during the break, Parker Griffith just referred to me as ‘a piece of blank,’ he threatened to, quote, ‘whip my beep,’ he also called me an m.f.-er,” said Matt Murphy on his eponymous radio show last Wednesday, after an intense interview where he questioned Griffith about his time as a doctor. “Should I call the police? I’m not kidding!”

He later tweeted out the exact verbiage:

Parker Griffith just referred to me off air as "a p*ssy" "a piece of sh*t" and "motherf**ker". He also threatened to "whip (my) ass".

The Yellowhammer News reported later that Murphy had filed an incident report with the Homewood Police. “Frankly, I feel like [Griffith] meant it,” Murphy said:

He was furious. He was like a caged animal. I understand that we do controversial things on the show sometimes, but it’s rare for me to feel physically threatened in my studio, but that’s how I felt Wednesday. I thought he was going to hit me. First he threatens physical violence, then he threatens to damage my career. I filed the incident report because I felt threatened, but I also thought it was important just to get this on the record. I’m afraid what a man with that sort of temperament would do if he got into the governor’s mansion.

In a statement released to the press, Griffith apologized for his “choice of words,” but said that Murphy had instigated it with his line of questioning. “He was wrong to do what he did, he was wrong to make a private conversation public and he’s a lapdog for the failed Governor Robert Bentley but that does not excuse the fact I used profanity,” Griffith wrote. “I should have chosen my words more carefully.”

Which, really, means he’s not that sorry.