The word “retard” has two meanings: first, the insult meant to disparage mentally handicapped individuals, and second, “to make slow; delay the development or progress of (an action, process, etc.); hinder or impede.”

Jeb Bush used the word in a video recorded by American Bridge, with the obvious intent of using its second definition, in talking about immigration. He said, “We should not have a multicultural society. When you create pockets of isolation, and in some cases, the assimilation process has been retarded, it’s wrong. It limits people’s aspirations.”

Now, given the context plus the fact that someone like Bush wouldn’t just go ahead and say something randomly insulting like that, it’s pretty clear what he meant.

But Talking Points Memo still scare-quoted it up as if Bush meant it in the offensive context: 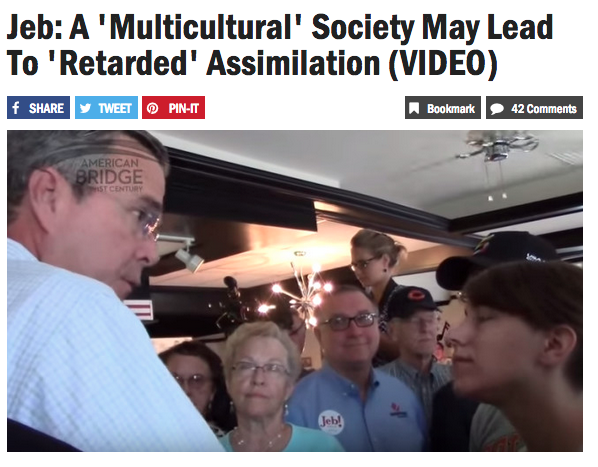 Someone end this >>> Jeb: A 'Multicultural' Society May Lead To 'Retarded' Assimilation (VIDEO) @TPM http://t.co/JI83KHyOYR

The reaction from some conservatives on Twitter was justifiably along the lines of WTF:

Is there a reason for scare quoting "retarded" when it has a perfectly valid use here? https://t.co/6UsaRxxGTs

Jeb uses the word "retarded" properly, TPM scare-quotes it so people will think he was disparaging mentally disabled http://t.co/xRhZadKhMZ

someone used the word "retarded" to mean "slowed" per the dictionary definition and you've decided to be a retard? https://t.co/h185lDpjXo

All partisanship aside: Are there really pro writers out there who don’t know that “retarded” has a non-slur meaning? http://t.co/IwC3kxhilT

We're now in "Jeb Bush didn't say anything offensive but we can interpret it that way if we want, thus it is wrong" territory.

If this is an honest attempt to gin up an outrage moment, it's a strikingly subpar effort. https://t.co/UmAe3E1sA6

You really have to be intellectually dishonest to tug on that threat.

The New Republic‘s Jeet Heer started posting tweets defending the framing, but a few tweets into it he got some pushback from decidedly non-conservative people and by the end apologized:

If I were a member of the Bush family I'd avoid the word "retarded" https://t.co/n9o8ZhtIrr

1. Many conservatives on my timeline are defending Jeb Bush's use of the word "retarded" here: http://t.co/tmtA3Isxqi

2. This brings up a point about political language that I've been meaning to make: that there are shades of connotations.

3. The defence of Jeb is that in a dictionary sense he said nothing offensive: he meant "retarded" as in "slower"

4. Thing is, words have conniptions more potent than dictionary meanings. "He's a queer fellow – I mean, odd — look at the dictionary!"

5. In the current case, "retarded" is a very, very potent insult. So much so that the slur overwhelms other dictionary meanings.

@HeerJeet you might want to back away from this one

@chrislhayes @jim_newell @HeerJeet yeah man, you screwed the pooch on this one. Nothing to see here.

6. This applies also to Trump's notorious Mexican rapist speech. Did he say "they are rapists" or "their rapists"?

7. In Trump's case, simply throwing Mexican and rapists in the same sentence carried a more powerful connotation than either word choice.

8. In Bush case, I'm leery of Bush using otherwise acceptable word because it comes in context of polemic, so feels charged.

9. But, I should note that there are many strong dissents against me on this, so I could be wrong: https://t.co/SCwl08CGlw

10. I think the serious objections to my response are a) best to give generous reading of opponents words & not look for worse connotation

11. b) focus on these sort of linguistic minutia ignores takes attention from much larger political & policy objections to Bush's speech.

12. In reading these twitter essays, It's perhaps useful to remember that I'm often thinking out loud about things I'm uncertain of.

13. My initial response on listening to Bush's speech was to assume he was evoking a slur. But based on strong arguments, I see I was wrong

14. So: apologies for both mis-interpreting Jeb's words and also for making a juvenile joke based on that misinterpretation.