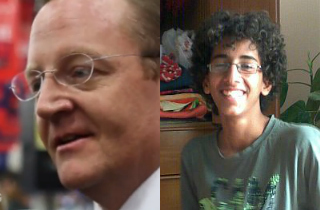 After being cornered by activist reporters at Lynn University, former White House Press Secretary Robert Gibbs offered a misleading defense of the Obama administration’s use of a “kill list” to determine which target should next be evaporated by a drone strike, and offered a truly pathetic justification for the drone killing of an innocent 16-year-old American citizen.

Gibbs initially dodged several questions about President Obama’s hypocritical support for the indefinite detention provision of the National Defense Authorization Act of 2012, but was eventually cornered by We Are Change reporters, who provoked the following exchange:

REPORTER: How will Obama defend his secret ‘kill list’ at next week’s debate?

GIBBS: Look, this president has taken the fight to al Qaeda.

GIBBS: When there are people who are trying to harm us, and have pledged to bring terror to these shores, we’ve taken that fight to them.

REPORTER: Without due process of law?

GIBBS: We have taken the fight to them.

As the Atlantic‘s Conor Friedersdorf notes, this defense is especially misleading because “since the kill list itself is secret, there’s no way to offer a specific counterexample. But we do know that U.S. drones are targeting people who’ve never pledged to carry out attacks in the United States. Take Pakistan, where the CIA kills some people without even knowing their identities…. The vast majority would never make their way to New York or Washington, D.C., and the Obama Administration would never agree to rules that permitted only the killing of threats to ‘the homeland.'”

For some background: Abudlrahman was the son of Anwar al-Awlaki, the American-born terrorist who was killed by a drone in Yemen in early September 2011. The elder al-Awlaki was a known terrorist who had left American for Yemen to join up with al Qaeda. During his time as a leader, he accrued a body count by inciting multiple violent terrorist acts against Americans. The Obama administration celebrated his assassination, and “targeted killings” became a frequent topic of discussion culminating with the New York Times story revealing the administration’s use of a secret “kill list” for drone targets.

But the younger al-Awlaki was on no such list. As Esquire reported, he was not a member of al Qaeda when he was killed by a drone strike two weeks after his father. “Nor was he ‘an inspiration,’ as his father styled himself, for those determined to draw American blood; nor had he gone ‘operational,’ as American authorities said his father had, in drawing up plots against Americans and American interests. He was a boy who hadn’t seen his father in two years, since his father had gone into hiding,” the magazine explained.

The night the 16-year-old was killed in Yemen, he was reportedly saying goodbye to his second cousin who had temporarily housed him during his search to find his (unbeknownst to him) already-dead father. He was seated on the side of the ride, eating dinner over an open flame. An American drone appeared in sky and killed everyone there.

With that story in mind, Adamson confronted Gibbs and the following exchange ensued [emphasis mine]:

ADAMSON: Do you think the killing of Anwar al-Awlaki’s 16-year-old son is justifiable?

ADAMSON: His son was still an American citizen.

GIBBS: He did great harm to people in this country and was a regional al Qaeda commander hoping to inflict harm and destruction…

ADAMSON: But it’s an American citizen that is being targeted without due process, without trial. And, he’s underage. He’s a minor.

GIBBS: I would suggest that you should have a far more responsible father if they are truly concerned about the well being of their children. I don’t think becoming an al Qaeda jihadist terrorist is the best way to go about doing your business.

Of course, the younger al-Awlaki was not a terrorist, nor was he a member of al Qaeda. Also: the 16-year-old kid wasn’t killed in the same strike as his father, so the justification of “collateral damage” is not available here. But alas, Gibbs defended the killing without due process of a young American citizen simply because of his father’s irresponsible decision to join al Qaeda and fight against his native land.

[Side note: When I first heard this Gibbs remark, I immediately recalled an eerily appropriate Conor Oberst lyric: “Now men with purple hearts, carry silver guns / And they will kill a man for what his father has done / But what my father did, you know it don’t mean shit / I’m not him.”]

Perhaps Gibbs should have taken a tip from his Obama teammate Rep. Debbie Wasserman Schultz. When she was confronted by the same activist reporters, she pretended not to know about the “kill list” and dismissed the question as unserious before heading off to answer more comfortable questions.