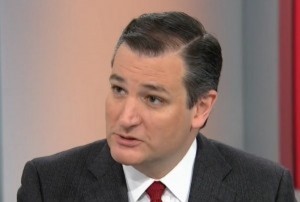 On the heels of one poll that shows Ted Cruz leading in Iowa, out of a sea of other polls showing Donald Trump beating everyone’s drawers off, the media is once again trying to concoct a threat to Trump’s supremacy. Chuck Todd even went so far as to call Cruz the “invisible frontrunner,” and to theorize that Cruz’ supporters are more likely to show up and caucus for him than Donald Trump’s.

It’s true that Cruz is surging in all the polls, but he’s still being crushed by Trump nationally, and is losing by 13 points in Iowa according to the latest CNN/ORC poll. The media is so desperate not to admit that Trump’s brand of racism and barbarism is genuinely popular with Republicans that they have leapt onto Cruz’s ascendancy with both feet, and are trying to will him into slaying the beast.

There are several problems with this, not the least of which is that Cruz’s gains have largely been at Ben Carson‘s expense, not Trump’s. Still, the theory goes that Cruz now has momentum, while Trump continues to hold, or at best edge up from, his support in the high 20s.

It is Cruz’s momentum, many have observed, that likely spurred Trump to announce his proposal to ban all Muslims from entering the United States,  and it is that move which exposes the fatal flaws in the media’s Cruz narrative. The first flaw is that Trump’s move worked, even if he didn’t mean for it to.

It’s early yet, but indications are that while every political and media figure lines up to denounce the no-Muslims policy, it is insanely popular with those pesky Republican voters. A Bloomberg poll released Wednesday showed that a full 65% of likely Republican primary voters approve of Trump’s plan. The poll was conducted online, but using recognized scientific polling methodology. Other polls taken this week have shown a jump in Trump’s support following the announcement of that plan. Those preliminary results may end up cooling in the final analysis, but I wouldn’t bet on it. People are scared, and in that Bloomberg poll, even 18% of Democrats favored Trump’s plan.

The second, more serious flaw in the media’s plan to kill Trump with Ted Cruz is that Cruz has badly failed the test that Trump’s announcement was designed to put him to. The best thing Cruz could have done, as far as Republican voters are concerned, would have been to agree with Trump, but Cruz’s second-best response was to disagree while praising Trump:

“In the media, there is no shortage of criticism for Donald Trump. I do not believe the world needs my voice added to the chorus of critics, and listen, I commend Donald Trump for standing up and focusing America’s attention on the need to secure our borders. Border security is national security, and I would note that no one can purport to be protecting the national security of this country if they are not prepared to secure the borders.”

This opening bid was a clever attempt to pit himself and Trump against the media, but the implicit message was one of weak disagreement. On Thursday morning, Morning Joe host Joe Scarborough pressed Cruz to speak in more detail about his disagreement with Trump’s plan, and Cruz tried to run the same game on him, but exposed the true reason for his reticence to attack the policy:

“I said I disagree with the proposal. The question I get day in and day out, please attack Donald Trump and I point out my approach to Trump has been the same to every other republican candidate. I’m not interested in personal insults and mud slinging…

…I get that the media wants us to play theater critics and critique every other proposal. What I’m focusing on are my own.”

Cruz is again trying to pose the media as his opponent here, but Joe Scarborough isn’t asking him to attack Trump personally, he’s asking for a more emphatic position on Trump’s policy; he’s not asking Cruz to critique “every other proposal,” he’s asking about a plan that has already had seismic political implications. It’s not the sort of thing you “kinda” disagree with.

If Cruz’s response didn’t already have the false ring of cowardice to it, then consider the times Cruz was willing to “play theater critic” and weigh in on opponents’ policies. For example, he had no problem going after a policy that he said “made it easier to bring Syrian Muslim refugees into this country,” and equating his Republican opponent with Barack Obama in the process:

“Marco’s campaign has determined that his long time support of Chuck Schumer and Barack Obama’s amnesty plan, particularly making it easier to bring Syrian Muslim refugees in this country, that now they’re worried about it politically…”

Cruz also didn’t mind playing Siskel and Ebert with another Republican rival’s policy positions, using the exact “what we stand for” construct that he resisted when Scarborough asked him about Trump’s plan:

The common thread here is obvious: Ted Cruz is happy to take on the runts of the litter, but for some reason, won’t even explain why he disagrees with Trump. There are only two deadly conclusions voters can reach: either Cruz really does agree with Trump and is afraid to say so, or he disagrees, and is too afraid of Trump to explain why.

Ted Cruz may succeed in keeping Donald Trump and his supporters from attacking, and he may pick up some of the support that currently resides with also-rans like Mike Huckabee, but even if they mostly agree with him, Republican voters will not pick a candidate who is afraid of the guy he’s trying to topple.

Republican voters are attracted to the same thing in Trump that they’ve been attracted to for decades in other Republicans. No other candidate is going to out-resent Donald Trump, and even if someone like Ted Cruz succeeds in playing him to a draw, Trump will win because he scares the rest of them. Republican voters don’t want a weak nominee.

It isn’t enough to be willing to go after Trump, or John Kasich would be making a dent. The only way Trump will lose is if someone delivers him the beating he so richly deserves, and Ted Cruz sure isn’t the one to do that. Trump has drilled down so far into the Republican voters’ psyche that I doubt any Republican candidate can whip him like he needs to be, because there’s just no room to throw those punches. That epic beating, if it ever comes, will be at the hands of Hillary Clinton, in a general election debate.