Ted Cruz Laughs at Crack About Islam Being a ‘Peaceful Religion’

Ted Cruz Laughs at Crack About Islam Being a ‘Peaceful Religion’ 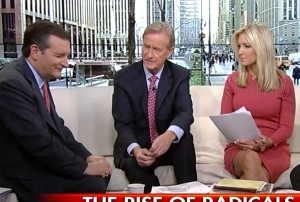 President Obama is constantly taking guff for avoiding phrases like “Radical Islamic Terrorism,” even though he has clearly acknowledged the religious aspect of groups like ISIS, but prefers to make clear to the majority of Muslims that their religion is not the enemy. One of his chief “Radical Islamic Terrorism” griefers is Senator Ted Cruz (R-TX), who just provided an excellent object lesson in why the President treats the subject this way.

On Wednesday morning’s Fox and Friends, Cruz went into his patented routine about “political correctness” and Obama’s refusal to use every Republican’s favorite Eyes Wide Shut password for the main house “Radical Islam” (the password for admittance is “Benghazi”). Seconds after slamming Obama for “lecturing the American people about Islamophobia,” though, co-host Steve Doocy proved the President’s point by making a sarcastic crack about Islam, and all Cruz could do was offer a tiny laugh:

Cruz: what’s bizarre is the political correctness that they will not even say the words radical Islamic terrorism. Instead after every attack, after Paris, after San Bernardino, the president goes on television and lectures Americans on Islamophobia, enough is enough.

Doocy: Well, Senator, that’s because Islam is a peaceful religion!

Cruz: (laughs) Ih..it’s… they are so captive to political correctness that they will not identify the enemy.

You can see Cruz even stammers a little because Doocy has slipped up and told the truth about what Republican voters hear when the “radical Islam” password is used. Despite the fiction that they’re only talking about the bad ones, people like Doocy hear it as an indictment of the religion, and you can be damn sure that as President Obama explains, Muslims in America and around the world whom we need on our side hear it that way, too.