Ted Nugent: ‘Donald Trump Should Be Given The Medal of Freedom’ 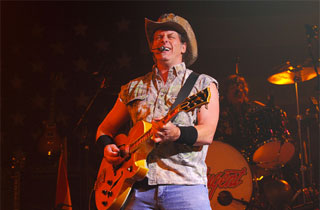 It should come as no surprise that Ted Nugent, the NRA board member and conservative guitar hero who once called for border-crossing immigrants to be shot on sight, would be a fan of Donald Trump‘s incendiary comments about Mexicans.

Nugent is such a big fan, it seems, that he wrote an article for World News Daily on Wednesday, saying that Trump ought to receive the Medal of Freedom for speaking his mind on the subject in such a “bold” and “honest” manner.

Donald Trump is running strong in the early polls because Americans are fed up with the political status quo, especially from left-leaning GOP Fedzillacrats who want to feed us cow dung while telling us it’s a cheeseburger. Our forefathers wouldn’t recognize the political labyrinth our professional politicians have created. The very things our forefathers warned us not to do as it pertains to embracing a centralized, powerful federal government is the very cliff our professional politicians have steered the Goodship America straight off of.

Nugent also blasted professional politicians as the true threats to American liberty, against which, Trump comes as a refreshing change from their “politically correct brain-dead games.” Nugent also described political correctness as “a public cancer that has eroded free speech and everything else good about America.”

“Instead of being condemned and lampooned by the likes of Ari Fleischer and his ilk, Donald Trump should be given the Medal of Freedom for speaking his mind in such a bold, honest and straight-forward manner. If you want to watch a real political train wreck, witness a real mess in progress, you need look no further than the professional politicians who have borrowed and spent this country into oblivion.”

Nugent finished the piece by openly challenging the GOP to embrace Trump’s position before they’re “finished”, as well as Trump’s critics to prove that anything Trump has said is inaccurate.

“I dare anybody to show me one word from Trump that isn’t accurate,” Nugent said. “What sort of denial gagged liar denies that our country is being invaded by drugrunners, murderers and rapists?”