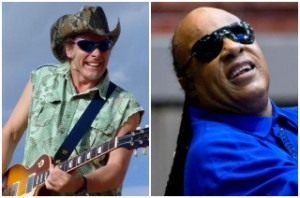 Conservative rocker Ted Nugent is still railing against Trayvon Martin, more than a week after George Zimmerman‘s acquittal, this time extending his attacks to Stevie Wonder, who has spearheaded a boycott of Florida and other states with “Stand Your Ground” laws. Appearing on Boston radio show “PM In The AM,” Nugent asked how “brain-dead” Wonder would have to be to defend “hoodlum, dope-smoking Trayvon Martin.”

“So 700 black people, mostly young children and young people were slaughtered in Chicago last year by black people,” Nugent said on the show, “and not a peep out of Stevie Wonder. Are you kidding me?”

“How brain-dead do you have to be?” Nugent asked. “How strangled by denial, how dishonest, how cheap do you have to be to focus on a clear-cut case where all the evidence, from the DOJ, from the FBI, from the army of investigative specialists in Florida determined that George Zimmerman acted in self-defense against a life-threatening attack by hoodlum, dope-smoking Trayvon Martin?”

All of that being said, Nugent said he would “pray” for “Stevie Wonder and all these other numnuts who think that Trayvon Martin’s life is more important than the tens of thousands of slaughtered blacks at the hands of blacks.” Nugent, who is evidently a fan of Wonder’s music, asked, “How do you go from being one of the most soulful people in the world to being absolutely soulless?”

Last week, Nugent penned an op-ed for right-wing website WND, in which he referred to Trayvon Martin as an “enraged black man-child” and a “Skittles hoodie boy.”

Listen to audio below, via WXBR: