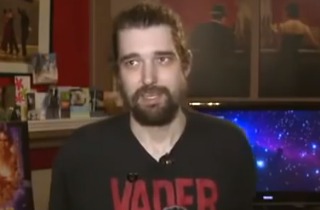 Before he becomes one with The Force, Daniel Fleetwood got his last wish: an early screening of Star Wars: The Force Awakens.

For the past few months, Fleetwood has been battling a form of cancer that doctors have said ought to have claimed his life back in September. Fleetwood, a devout fan of the Star Wars franchise, was worried that he wouldn’t be able to make it to the next film’s release in December, so his family and friends started the #ForceforDaniel online campaign to drum up enough support so he could see an early rough-cut.

Fleetwood’s campaign picked up steam on Tuesday after receiving the support of several of the film’s biggest names and cast members, and today, his wife Ashley said on Facebook that he has gotten his dying wish.

To all our wonderful supporters, friends, family and awesome strangers: Daniels final dream was just granted!!! Today the wonderful Disney, Bad Robot and Lucasfilm teams made his final dream come true, Daniel just finished watching an unfinished version of Star Wars: The Force Awakens!!! We would like to thank the awesomely talented JJ Abrams for calling us yesterday to tell us Daniel was getting his wish granted! Lastly I want to thank ALL the amazing people who helped make this happen!!! May the force be with you all ‪#‎forcefordaniel‬

Mark Hamill, who portrays Luke Skywalker and supported Fleetwood’s campaign, posted his joy for his fan on Twitter:

I just read this and am elated for Daniel & his family! Thanks to the powers-that-be for making his dream come true. https://t.co/ImiAdyBxf8

In the words of Obi-Wan Kenobi, “The Force will be with you, always.”