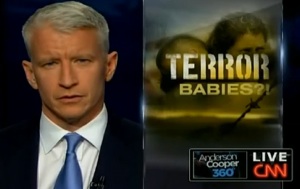 “Anchor Babies” is the pejorative term used to describe newly born children of illegal aliens who are born in the U.S. allegedly to provide a better path to citizenship to those who seek it. It’s a term that has been in the news more and more of late, in large part due to increased rhetoric by some who seem eager to repeal the 14th Amendment to the Constitution, which grants birthright citizenship to ‘anchor babies.’ But as one can see in the following clip of AC360, there is a new, more terrifying phenomenon at play for the Southwestern states of the U.S.: “Terror babies!” Duh, duh, duh!

Rep. Louie Gohmert (R -TX) appears to be the elected official most responsible for bringing our nation’s attention to this new and scary threat, since he’s made the “best” case that our national security is at risk from a nefarious terrorist plot involving pregnant women flying to the U.S. on tourist visas to have their babies, thus granting the newborns U.S. citizenship, and then returning home to raise their little U.S. citizens to someday come back and “blow us all up.”

Some of us were traveling to the Middle East last August, a year ago. And a lady on the plane was telling one of our group that they were about to have their second granddaughter. Her husband was with Hamas, her grand — I’m sorry her son-in-law was with Hamas. And that they were going to do with the second as they did with the first grandchild. Daughter is going to come to America right before it’s born on a tourist visa. Have the baby. They just like the option of having American citizens in the family…

We’re bringing them over here on tourist visas, some illegally, letting them be born here and saying this is an American citizen. So come back in 20, 25 years when you’re ready to blow us up.

Last night, Anderson Cooper had on as guest Texas State Rep. Debbie Riddle to ask her about the threat of “terror babies,” specifically trying to pin down where they are getting the “anti-Terror baby” set are getting their information. Riddle gets flustered and reveals that she didn’t know that she was going to be “grilled” about the so-called “terror babies.”