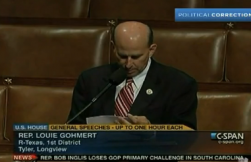 One has to wonder if the current role of YouTube in politics is merely to reveal to the world the utter crazy factor of our elected officials. Here is the latest…because what’s a Congressional session these days without a Hitler reference? Texas Rep. Louie Gohmert decided to put his time on the floor to good use this week by reading out loud “respected conservative columnist” Thomas Sowell‘s editorial which compares, among other things, the BP escrow fund to something Hitler might have done.

It’s tempting to ponder whether Sowell has been watching Glenn Beck of late (actually, I was joking, but then I Googled). Meanwhile, the fact that according to Dave Weigel there is “no appetite [in the Senate] — really, none — for criticizing the BP fund” did not stop Gohmert from regaling the House with this comparison, bemoaning the support Obama gets from “useful idiots.” Presumably Gohmert felt this was a good use of everyone’s time because apparently even though Gohmert didn’t vote for Barack Obama in 2008 he would have voted for Thomas Sowell, providing, of course, that Sowell furnish a copy of his “birth certificate, together with such other documentation as may be necessary to establish that the candidate meets the qualifications for eligibility to the Office of President under the Constitution.” Watch below.