The Buried Lede in CNN’s Poll: Americans Have Hated Republicans for Years, But…

The Buried Lede in CNN’s Poll: Americans Have Hated Republicans for Years, But… 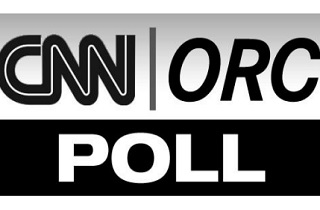 Aside from trying to cheer Republicans up about their new poll by promising to tie the game with President Obama‘s speech later today, CNN has been reporting that their latest CNN/ORC poll shows “44% have confidence in the President versus 31% in Republicans in Congress,” that 63% say John Boehner (R-OH) should be replaced as Speaker of the House, and that only 38% of Americans believe GOP control of the House of Representatives is good for the country.” Here’s what they’re not telling you.

Polls are only useful to the extent that people learn the right lessons from them, so while it ought to be painful for Republicans to admit how badly the government shutdown hurt them, there is a deeper, more important lesson in this poll that they will be tempted to ignore. Hell, it’s tempting for me not to point it out, but there’s little chance Republicans can do anything about it, and every chance that they’ll cherry-pick this fact: What CNN isn’t telling its audience is that the 31% confidence in Republicans  that their poll found has been the same since at least December of 2011. The last time they were above 31% in this poll was March, 2011.

President Obama, on the other hand, is down to 44% from 49% in December of 2012, and 50% in December of 2011. This has all the makings of a perfect Newsbusters post about how CNN is deceiving people into thinking the shutdown has hurt Republicans more than it has, and covering up bad news for Obama. If so, please link and credit Mediaite.

That 44%, though, precisely mirrors the President’s approval rating, and likely has the rollout of the Obamacare website baked into it, along with some “pox on both your houses” frustration. It should not be ignored, but the shift is not that dramatic, and is equally divided among people who have confidence in both, and confidence in neither.

What has changed dramatically, though, is that while Americans have had the exact same lack of confidence in Republicans for three years, their support for Republican control of the House has dropped by 13 points since the last time this poll was taken, in December of 2012, and the same 13 points since December of 2010. For years, Americans have had more confidence in the President by a wide margin, yet supported divided government. That long-term trend has changed dramatically, at least for now. 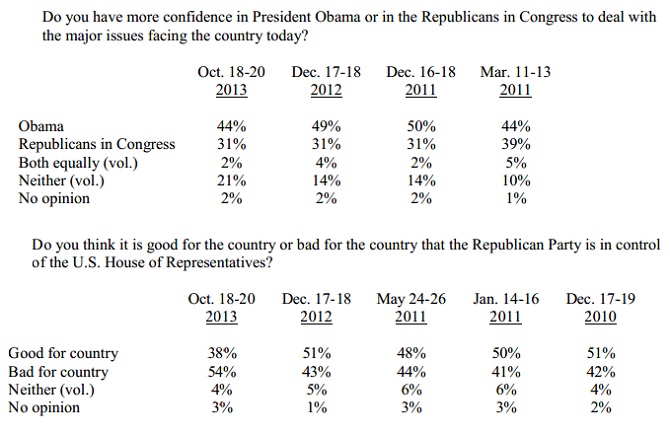 This could simply be more evidence of the damage inflicted by the shutdown, the effects of which could be temporary. However, these numbers were extremely durable, and remained consistent throughout the last debt ceiling crisis and the 2012 election. Divided government is supposed to be a reasonable check on power, ensuring, to the extent possible, that everyone’s views are reflected in the laws we pass. Instead, it has become a roadblock to doing anything at all, let alone to progress. It’s very possible that Americans are waking up to the fact that the Republican portion of this divided government is not interested in seeing their views reflected in legislation (like the health care law they invented), but rather, seeks only to obstruct.

Gerrymandering, polarization, and the weakness of midterm turnout make the liberal dream of a Democratic wave in 2014 a tough sell, and the trend away from divided government may not help all that much. Being sick of Republicans is not the kind of thing that drives turnout in midterm elections. As surely as Republicans need to pay attention to what the polls are telling them, Democrats need to resist the urge to rely on public antipathy for Republicans to carry them over the finish line.