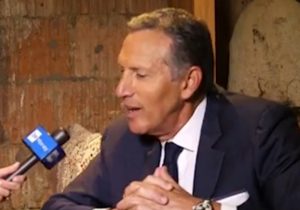 Anyone familiar with Starbucks’ CEO Howard Schultz knows that he’s considered a pretty progressive guy, so learning that he endorsed Hillary Clinton in September wasn’t much of a shock for anyone. When John Podesta became the latest Clinton backer to have his emails hacked and released last week, it was similarly unsurprising to learn that prior to that endorsement, Schultz sent Clinton some campaign advice.

What was surprising was that the advice was given pretty sharply and without any indication that it was wanted in the first place.

According to WikiLeaks, Schultz reprimanded the campaign for feeling “stale” in an email with a subject line of “For your consideration…”

Here is the text of the message, which was sent to top Clinton aide Cheryl Mills from July 2015:

From the outside looking in, I see an old style start to the campaign that feels stale with very few signs of the kind of freshness and transparency that the American people (especially millennials) will need to trust and ultimately elect HRC as President.

It’s also becoming very apparent and concerning that the media is not on her side. This will get only worse and not bode well for her as time goes on.

She desperately needs the people on her side. And, although it’s early, the imprinting process has begun… And, I don’t like how it feels.

Her inner circle and the powers to be, need to reject the status quo, and  understand how brands (and she is a brand) in the world we now live in are built. It requires a vision for the future that is steeped in truth and authenticity and builds an enduring emotional connection with the voters.

The rules of engagement for running for President have dramatically changed, accept it.

Substance absolutely matters, but so does the form it takes. The campaign feels “yesterday.” It’s too packaged and prescribed. The American people are longing for truth and someone to believe in.

Reboot the look of it all and the overriding message before its to late. The answer is not in the polls, it’s in her heart and her conscience. When she begins to truly trust herself and find her inner voice, and has the courage and conviction to share it with the world, things will change and change rapidly.

Encourage her to be herself. And, to embrace her core purpose and reason for being. That’s the lens it all needs to go through. It’s not politics as usual. Especially as it relates to technology and social media, but that’s a whole another story.

I’m not a politician and certainly not a pollster. Just one person with one vote, who cares deeply about the country and the dire need for authentic leadership.

It was unexpectedly condescending from a man who would go on to gleefully endorse her more than a year later. The “accept it” and parenthetical note that Clinton is, in fact, “a brand” feel especially lofty. More than a year later, he was extolling her “life experience” and “professional experience” in a way that did not at all belie that he had shipped her 327 words of unsolicited advice about how to avoid a campaign that feels “yesterday.”

At least he admitted he is “not a politician and certainly not a pollster” there at the end. We’re sure Clinton was worried for a second that this man who works in an entirely separate field and has never held public office had some rare polling insight that she had somehow overlooked.

Editor’s Note: An earlier version of this post indicated that Schultz sent the email in July of 2016. It was actually 2015. We’ve corrected our article to reflect that.