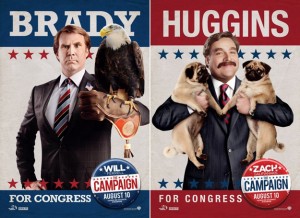 The director for comedians Will Ferrell and Zach Galifianakis‘s upcoming movie The Campaign says the film was inspired by real-life political squabbling — particularly, as Galifianakis noted, the back-and-forth that occurred during the recent GOP presidential debates. The movie, for those not counting down the days until its release, follows two congressional candidates (one of whom has pugs, which is probably 99.23% of the reason I plan on seeing this the day it comes out) playing increasingly dirty as they vie for political office.

Vanity Fair learned that much of the film was inspired by a rather topical point of discussion — how campaigns are pressured to go negative early on:

Director Jay Roach, who also helmed Game Change and Recount, says he did a lot of research on the pressure candidates are under to go negative early, and turn bad things into good things and vice verse. “That’s fascinating to me, the spin-doctor thing. And now with billions of dollars pouring into every campaign, paying the spin doctor, the commercial guy, the opposition-research guy, it’s such a heated battle,” he told VF Daily at a Peggy Siegal Company screening on Wednesday. “And our film seems extreme, but I bet you by the end of this election, it’ll seem like a documentary of this stuff.”

Galifianakis added that they “kind of knew a lot about politicians and politics before making the movie,” noting that the GOP debates were going on during shooting, and “we paid attention to that.”

“Plus, we’re just so inundated by the media that you don’t have to go that far to watch and study politicians,” Ferrell added. “They’re thrown in your face at all times.”