The Cruelest Cut Of All: John Edwards Now Goes To Supercuts

The Cruelest Cut Of All: John Edwards Now Goes To Supercuts 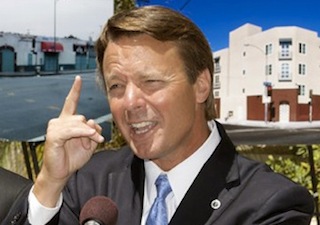 Oh, how the mighty locks of hair have fallen. Where they once were snipped by gilded scissors, gliding gracefully to the ground like a winter’s first snow, they are now cruelly chopped, falling to cold tiles like a wounded duck aborting its flight. Such is the follicular fate of John Edwards’ head. According to The New York Post, the embattled former Senator now apparently gets his hair cut at Supercuts.

RELATED: NBC’s Lisa Myers: Most ‘Believe This Prosecution [Of John Edwards] Is A Waste Of Taxpayer Money’

“Edwards, who in his political heydey went to stylist Joseph Torrenueva, whose Beverly Hills salon charges $300 to $500 per cut, now goes to Supercuts in Raleigh, NC, for a $12.95 job, employees say.

‘We just talked about his hair,’ said a hairdresser named Leah, who recognized Edwards from a photo.”

Wow. John Edwards now only pays $12.95 for a haircut?! And…I totally can’t tell the difference? Huh. Well, I guess that’s why I don’t host a reality show on Bravo.

Yes, back in a time that feels like forever ago, Edwards was criticized for the money he spent on his hair as well as the time he spent on it thanks to the notorious “I Feel Pretty” viral video. Now, however, he just goes to Supercuts like the rest of us.

Well, some of the rest of us. Personally, I cut my own hair. I save tons of money and it’s surprisingly easy. For those interested, just remember this advice; The trick to cutting one’s own hair is the same as the trick to living a successful life. No matter what happens, tell people you did it on purpose.