The Five Misses The Point While Attacking ‘Anti-Catholic’ Column
video

The Five Misses The Point While Attacking ‘Anti-Catholic’ Column 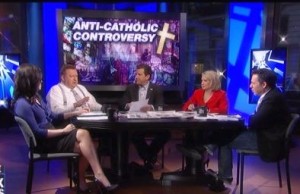 Last week, The Huffington Post published a column by author and Simpsons writer Larry Doyle entitled “The Jesus-Eating Cult of Rick Santorum.” In it, Doyle, a former Catholic, pretends to expose the terrifying truths of Catholic black-robed masses and “cannibalistic reverie.” The satirical piece has caused quite a stir and has now even gotten its own condemnation from The Five who devoted a whole segment to yelling about it. However, in the midst of their outraged reverie (I like that word and I’m gonna use it now), they seemed to completely miss the point.

There are a number of problems with The Five‘s critique. We don’t even need to get into their obsessive desire to turn this into a Left/Right issue (try to count how many times they say the word “liberal”) despite the fact that that has nothing to do with anything. Even worse, though, is when the conversation turned to how Doyle would never have dared to say any of these things about Islam.

Gee, guys, maybe that’s true. Maybe Larry Doyle is deathly afraid of Muslims and would never say anything mean about them. But even if that is true, it would still be completely, 100% irrelevant to anything he wrote in his column!

People who managed to read the piece without massive outrage blinders on (the pseudo-apology Doyle was forced to write has extra clarification for those that need it) should very easily be able to see what Doyle was actually writing about.

Doyle was not seriously condemning Catholicism. He makes it clear that he used to be Catholic (for all I know, the real Doyle, unlike the “Doyle” narrating the piece, still practices). He is using the piece to show Catholics (particularly those championing Rick Santorum as well as the candidate himself) why they should think twice about attacking other religions like Mitt Romney’s Mormonism, a faith that many “regular Christians” frequently call a “cult.” Sure, Doyle could have made his column about Islam like Greg Gutfeld and Andrea Tantaros seem to so desperately want, but that would have ruined the entire point. The satire was directed at Catholics, therefore it needed to be about Catholics.

But, honestly, I should lay off The Five. They come off like a batch of regular Mark Twains when compared to a piece from Yahoo! News entitled “‘Jesus-Eating Cult’ Shows Ignorance of Huffington Post, Huffington and Doyle.” Let’s take a look (emphasis mine):

“The goal of the article was to point out to Catholics who support Santorum that they should not criticize other religions and religious beliefs because it would hurt if someone did the same to their religion. A well-crafted article pointing out some of the examples from the published article might have been able to get the point across. Instead, the satirical expose could easily be read as a prejudicial strike against the Catholic faith and the Huffington Post should be held responsible.”

Whoa, whoa, whoa. Let me get this straight. So Yahoo’s writer understands Doyle’s point completely, but he still thinks it was ignorant because other people might misinterpret it? That’s insane.

Doyle’s piece was textbook satire. Hell, he even used the whole “cannibalism” angle from Jonathan Swift’s A Modest Proposal. You all remember A Modest Proposal, right? That was that thing that all of our teachers used to explain satire back when we were all in SIXTH GRADE! What is the problem here?!

Look, I don’t think Doyle’s column was perfect. The parts where he “attacks” the Church for its child-abuse scandals is unnecessarily mean and possibly off-game considering it isn’t in any way an absurd critique (although anyone actually paying attention could have still seen that Doyle’s tongue was in cheek when he claimed his “proof” was merely from “some research on the internet”). However, whether there were problems with the piece or not, I’m sick and tired of people lashing out at writers for positions they clearly don’t actually hold.

It’s time we stop blaming satirists just because other people are incapable of getting the joke.