The Five Overreaches: Attack On Prez For Jersey, Oklahoma Tours A Trivial Pursuit 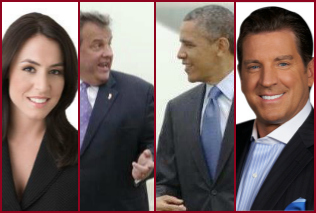 No program has enjoyed this much success this quickly in the history of political punditry. Not even two years old, Fox News’ The Five is an absolute juggernaut, oftentimes the #2 show in cable news behind the (primetime) O’Reilly Factor despite a 5:00 PM start. And all of it has been achieved after originally being considered just a cheap-and-easy summer bandage for a departed Glenn Beck.

For those outside the bubble, The Five is a 4-on-1 (conservative-to-liberal) fast break of opinion on hot political topics of the day. What makes the show so popular is its chemistry, candor and genuine performances. Say what you will about its content…it’s hard to argue anyone is acting any differently than they do off set, in a bar, at a party. Ultimately, they all connect with their relatively massive audience by simply being themselves, which is no small feat considering all of the phonies currently permeating our airwaves today.

But coming off a long weekend—a holiday one that allowed opinion hosts to get a feel for what the general public (See: friends, relatives, people within their social circles) is talking about these days—they may have become aware of an unfortunate, unavoidable fact:

Americans—by and large—don’t care as much about the IRS, Benghazi and the AP/James Rosen DOJ scandals as much as we inside the bubble do. And this is coming from the guy who voted for Romney…

So when some members of The Five decided to take the President to task for having the audacity to visit victims of the massive, deadly Oklahoma tornado, or for visiting the Jersey Shore as it kicks off its first (and most important) summer season since Sandy destroyed it seven months ago, it makes them appear small, petty.

For example, when Mr. Obama’s visit to Oklahoma was broached on the show, Andrea Tantaros felt the President’s speech was “effective,” saying “it appears he wants to stand with victims.”

So what’s the alternative? To somehow be against the victims?

Ms. Tantaros would go on to say, “there are victims in the three scandals. The conservative groups, James Rosen, the Associated Press and of course the families of the Benghazi fallen.”

She’s right on the last part, of course, but to equate getting your house blown away or losing a family member or members by way of a killer tornado with, well, anything that doesn’t involve not suddenly dying is what one would describe as “overreaching”.

Perhaps Andrea experienced the same kinds of conversations I did over the long weekend…discussions that included talk about the housing market exploding (more than a few friends are in the market as either buyers or sellers). Or between poignant observations on the NBA, NHL playoffs or Game of Thrones, talk about the stock market going through the roof, investments paying off. Or the most popular: Just how damn cold it’s been here in the Northeast lately. IRS? Rosen? Benghazi? Not on the list…and that may seem odd to those inside the bubble.

Back on The Five, Eric Bolling called the timing of the President’s visit “interesting” and proceeded to ask Bob Beckel, “What does Obama going to the Jersey Shore have anything to do Jersey Shore revenue?”

Bolling, like me, is a Jersey Shore guy…and therefore must know that the free advertising the area received by virtue of a Presidential visit—complete with a rare and welcome sight of bipartisanship courtesy of Chris Christie and said President—can only be a good thing for the beach communities still recovering from the storm. To attempt to somehow connect the timing of the President’s visit (Memorial Day weekend, lots of press already there) with an effort to avoid scandals is a bit of stretch. The one liberal on the panel (Beckel) calmly and correctly made that very point.

Remember: Bipartisanship is considered boring, almost sacrilege in the corridors of Fox News and MSNBC. And when people of power from both sides of the aisle actually get along or accomplish something for the greater good, that only means three words to cable execs:

And perhaps going after the President on a trivial matter like this is why the bigger scandals—the ones with real meat that are appropriately being described as “Nixonian”—aren’t having any profound effect on Mr. Obama’s approval ratings (stubbornly sitting at 48 percent in Gallup and Rasmussen as of May 28th). It’s impossible to believe if, say, President Bush (43), had his justice department spy on Chuck Todd, or had his IRS department target liberal groups, or had his State Department handle Benghazi in the same inept and deceptive manner…that he’d be able to weather the storm as well as the 44th President has to this point.

So maybe when real estate moguls are crying wolf about birth certificates, or when right-wing radio is labeling the President a Marxist/socialist/communist or any hyperbolic version of “ist” thereof, or when conservatives complain about the First Lady being overexposed…maybe that’s why righteous outrage over this serious trio of scandals is basically being ignored by those who don’t live and breathe politics 24/7.

Tantaros and Bolling are passionate, effective, unfiltered pundits on a program that’s the envy (from a ratings perspective) of cable execs across the dial. Whether you agree with them or not, they absolutely believe what they say and never back down from a fight.

It makes this a fight both would have been wise to avoid.

Watch the segment from The Five below: