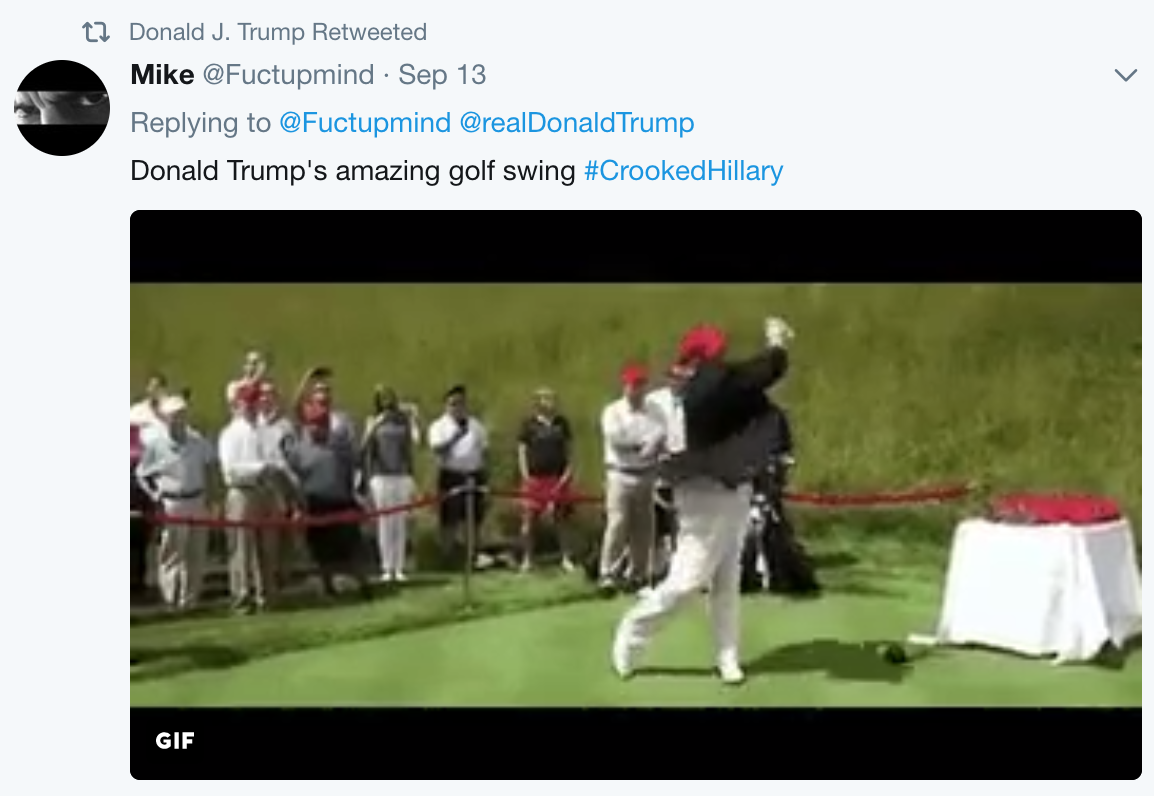 On Sunday, President Trump retweeted an edited gif from a random Twitter account of him hitting a golf ball at Hillary Clinton using a clip of her when she tripped while getting on an airplane.

I’m going to be perfectly honest. When I first saw the gif, I bursted out laughing. It was so simple yet hysterical. Even thinking about it had me chuckling all day.

But not everyone thought it was funny. In fact, people were really upset by the retweet. Perhaps too much.

The Atlantic‘s David Frum called this “fantasizing violence.” The Washington Post‘s Ruth Marcus accused Trump of thinking “hitting women is funny.” CNN’s Ana Navarro demanded that such behavior “should not be normalized.”  Sen. Dianne Feinstein (D-CA) released a full statement on Trump’s “Dangerous Clinton Obsession” and how the retweet “demeans all women.” And Stephen King, the author of The Shining, It, and Carrie, thought the retweet “indicates” that Trump has a “severely f**ked-up mind.” Again, that came from the author of The Shining, It, and Carrie.

Look, unless you’re a Trump sycophant, we can agree that the president acts immature and childish from time to time, especially on Twitter. That being said, such antics helped him get elected and just because he’s our president that doesn’t mean he’s going to stop, even though he arguably should.

It’s one thing to disapprove of the retweet, but to paint it as an attack on women is ridiculous and more laughable than the gif itself. If you saw that same gif shared by one of your friends, you might think it was funny and share it yourself. Does that make you sexist? Of course not and the same applies to Trump. The average person found the gif funny. Even Jimmy Kimmel, who hates Trump just like any other late-night comedian, had to admit it was funny as his own audience laughed at it.

The outrage towards this retweet is more artificial than Jane Fonda‘s face at the Emmys. It reminds me of when Trump shared the gif of him wrestling the CNN logo. The media (CNN in particular) got completely carried away with their reaction. Not only did several people in the media including CNN’s Navarro accuse Trump of “inciting violence” against journalists, CNN essentially blackmailed the Reddit user who created the gif and threatened to dox him if he didn’t apologize. All of this over some stupid gif.

Meanwhile, Trump was banking on such a knee-jerk reactions from Democrats and the media just like he did during the election. They cannot control their own hatred that they let their emotions get the best of them constantly and Trump takes advantage of it.

And we can’t forget the timing of this retweet. It came after Hillary Clinton launched her book tour of her memoir What Happened. In the past week, she called him a “clear and present danger” to the country and stopped short of calling him a white supremacist. Now she says she can’t rule out challenging the results of the 2016 election. We’ve all heard that Trump is a counter-puncher, but if Clinton can’t handle a silly gif, perhaps she isn’t the strong woman her voters thought she was.

We all know Trump is incapable of taking the high road, but frankly, neither can Clinton. I mean for goodness sakes, she released entire book that’s about blaming her election defeat on everyone but herself. And in the end, more people will laugh at this gif of her being hit by a golf ball than will read her book. So we need to dispel this myth that she’s a victim because she isn’t.

There is plenty that Trump says and does that’s worth criticizing and the policy of his administration deserves a robust debate, but freaking out over this gif not only makes his haters look pathetic, it plays into his hands. Democrats and the media need to take a deep breath and choose their battles wisely because after all, Trump is a master baiter.