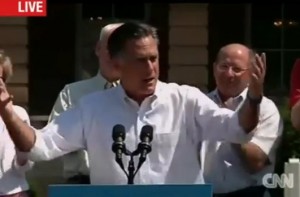 Liberals and Democrats are taking a degree of glum satisfaction from the fact that Republican presidential candidate Mitt Romney managed to give back some of the points President Obama‘s comment about the private sector gave him yesterday by campaigning against police, firefighters, and teachers. In response to the President’s remarks, Romney derided the notion of hiring “more fireman, more policeman, more teachers,” adding “Did he not get the message of Wisconsin?”

There was a time when attacking these three groups would have been political suicide, but things have obviously changed, especially where teachers are concerned (whatever the “message of Wisconsin” was, it didn’t include police and firefighters). It has become easy to demonize teachers, to blame them for the ills of public education, because there is genuine frustration with the fact that teachers’ unions make it inordinately difficult to fire a bad tenured teacher. That’s an easier thing to explain than the fact that those unions also protect all of the good teachers, and have transformed the profession into one that can give educators a decent living.

But what about police and firefighters? Aren’t they the “heroes,” the first responders who became de rigeur accessories for every post-9/11 politician? How can there be any advantage to kicking those guy in the teeth?

Maybe, maybe not, but the Republicans’s treatment of them thus far has shown that they don’t expect to pay a price for it. A closer look at what Romney said, though, might give a clue as to who this message is for:

Who does Romney think those 700,000 public sector workers are? Spacemen? And for that matter, who are those firemen, policemen, and teachers supposed to be protecting and educating? Ghosts? Sasqui?

No, they’re protecting and educating people that Mitt Romney doesn’t care about, at least from a political standpoint. When Romney says he needs to get 50.1% of the vote, he’s really only talking about pulling independent voters, who are overwhelmingly white and middle class.

Republicans like Newt Gingrich have already made clear who they think are most affected by failing schools, and Romney’s solution for them is to divert funding to those schools into vouchers to subsidize private schools.

Similarly, if you run a Google search on police layoffs, the results make clear who is being hurt most by Republican opposition to the President’s plans to help states keep cops on the job. The cities of Camden and Newark, New Jersey, have seen steep rises in crime following deep cuts to their police forces, including a 28% spike in homicides in Camden in 2011. The City of Paterson, New Jersey saw an explosion of gun violence when it shed 20% of its police force. These are not places where Mitt Romney ever hopes to pick up votes.

Contrast that, however, with the challenges that reduced police resources present in a place like, say, La Jolla, California, site of Romney’s soon-to-be-car-elevatored beach mansion. Here’s what San Diego Police Dept. Assistant Chief Boyd Long looks for in a La Jolla police captain:

“I wanted someone to go to Northern who understood the complexity of the issues involving alcohol and the beach problems. He has a great working knowledge of the region. I needed someone who could hit the ground running,” Long explained.

When then-Lt. (Brian) Ahearn was assigned to La Jolla and the beach communities, he focused on the Children’s Pool seal conflicts while also working behind the scenes, particularly with surfers, to deal with burglaries targeting La Jolla Shores beach-users, Long said.

How well do you think the War on Seals would prepare someone to be a police captain in Camden?

New La Jolla police Captain Brian Ahearn‘s comforting message to La Jolla residents, that in an emergency, “Chances are there will be an officer nearby,” also explains why there’s safety in Mitt Romney’s attack on police and firefighters. While Americans overwhelmingly support hiring more teachers, police officers and firefighters, the Romney message is that their absence is somebody else’s problem. Romney’s target audience might need to get their surfers to be more vigilant, but nobody’s going to die behind it. Hell, if you’re Mitt Romney, you just throw on a uniform yourself, and have at it.

What Romney doesn’t realize, though, is that not only are those 700,000 public sector workers part of “the American people,” as are the American people they protect and serve, but the money they would be spending if they still had jobs would have gone to support private sector businesses, and private sector job growth. Public sector employees don’t shop in some segregated Gov-Mart, they’re part of the rest of America. His failure to recognize that is the real revelation.