The Tea Party’s Fahrenheit 9/11: What To Make Of The Atlas Shrugged Trailer 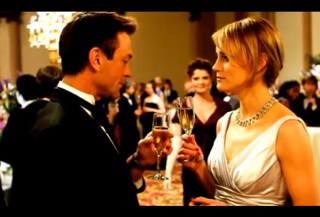 The most anticipated political film since the inception of the Tea Party movement is nearing its release, and, just in time for CPAC, the company behind it has released a trailer full of explosions, despicable Washington villains, awkward sexual tension– the kitchen sink of Hollywood advertising gimmicks. With more than on-set interviews to judge Atlas Shrugged: Part I on now, it is abundantly clear that the team behind it went all or nothing on interpreting Ayn Rand‘s classic novel.

Back in July, I posited that, if done right, the Atlas Shrugged film series could be the most significant political film to be released since Fahrenheit 9/11 and, if the timing is right, could cause a shift in the American right that would put a nail or two in the coffin of social conservatism. In fact, calling it the Tea Party’s Fahrenheit 9/11 doesn’t seem entirely like a stretch. Yet for this movie to not end up in the bargain bin– the quality of product here had to be astronomically high, especially given the lack of big names in production.

The trailer only halfway delivers. It’s got explosions and sleazy congressional types and, perhaps, way too many John Galt references. Hank Reardon, the steel entrepreneur who unites with the protagonist’s railroad company to use his new metal prototypes to build rails gets a ton of face time, but he’s also the most believable actor in the two-minute endeavor. The main characters seem to constantly be flanked by scrawny-looking skeptics telling them they are ruthless and dead inside, though the dramatic music implies otherwise (in one scene, a character who vaguely resembles disgruntled Wikileaks employee Daniel Domscheit-Berg warns Reardon to not be so open about his love of money. It’s not exactly a De Niro moment.). There is, sadly, a lack of the film’s best character, Francisco d’Anconia, an Argentine copper heir who disguises his superhuman mental and physical abilities by pretending to be a drunken, gambling playboy of loose morals and judgment– and takes up most of the first third of the book. Perhaps this is, again, simply because the the Reardon character is the most believable, or maybe it’s that Argentina actually does have an heir by the name of Ricardo Fort (textiles and chocolate industry) who behaves uncannily like the Rand character. And, of course, John Galt is nowhere to be found– he’s not in the movie. In short, the trailer feels a little like the trailer for The Social Network— loud, melodramatic, wildly over-the-top, and heralding either of one of the best or worst things ever recorded on film.

As for its political merits, this trailer doesn’t exactly promise the quality of acting or screenwriting that it would require to convert a nation to objectivism, but this project was never really about conversion. It was about preaching to the choir. That, at least, it appears those promoting the film know, as Dave Weigel reports that FreedomWorks, a Tea Party-affiliated group, is distributing “Who is John Galt?” signs and the filmmakers themselves have been airing clips at the conference, which every year seems to lean more and more libertarian. Whether the enthusiasm for the film will stretch out all the way to the film’s release is as yet unclear, but one thing is certain– being the first of a trilogy, if this film is even remotely mediocre, the series won’t last until 2012. Yet given the reception Ron Paul received this morning, it may not even need to.

Watch the trailer (and make up your own minds) below: