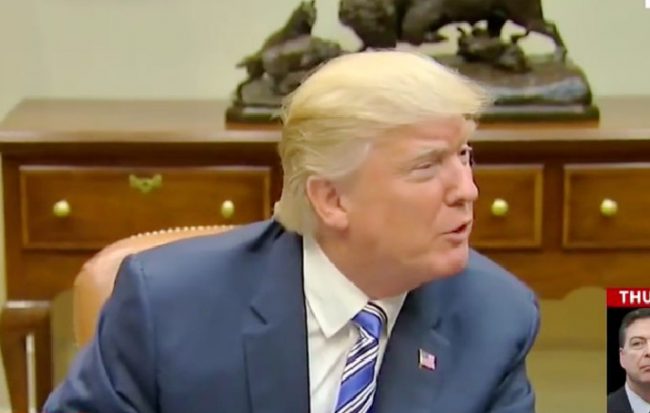 Before former FBI Director James Comey’s much-hyped Senate testimony, I predicted that everyone would declare victory and not much would change. It sure seems this forecast was far better than the one I made about it being nearly impossible for Donald Trump to become president in the first place.

At the core of why I was so certain that even Comey calling the president a liar, several times, in front of a massive television audience, would have very little immediate impact, is the strength of Trump’s cult-like base of support. I have written several times about how and why the group I now refer to as “Cult 45” is now completely impervious to any negative information about their leader, partly because Trump and his “state-run” (formerly “conservative”) media friends have inoculated them with the “fake news” canard.

In the day since Comey actually testified, there is every indication that, once again, the cult has held strong in the face of news which would have previously doomed any previous president not named Bill Clinton or Barack Obama. CNN even held a Trump supporter focus group where the participants felt BETTER about Trump after Comey eviscerated him as a man completely unfit to hold significant public office.

My own interaction online with Trump cultists (with whom, as my rising blood pressure and greying hair prove, I have extensive interplay) completely verifies the very unscientific CNN result. Clearly emboldened by being able to see all their fellow cult members spew the same talking points on Twitter and Facebook, and with Fox News/Talk Radio to serve as a security blanket in times of trouble, their support of Trump is a strong as ever, which in turn means that no one in Republican Party can even strongly criticize him over this fiasco.

My view of what Comey told us is very clear. Unless you think he is, implausibly, a blatant liar, then Trump asked for Comey’s “loyalty,” directed him (while alone) to end a criminal investigation involving his campaign, fired him when he didn’t do so, and then told a Russian spy in the Oval Office that he did it because of the trouble the Russian investigation was causing him.

Other than that Mrs. Lincoln, how was the play?

Quite simply, unless something happens to significantly alter that narrative, if Democrats take the House of Representatives in 2018, that sequence clearly adds up to an impeachable offense (though I doubt Trump would actually be removed from office based on the current factual record).

However, to the Trump cultists, this line of reasoning has literally zero significance. Their rebuttal to my argument takes on several forms. One is that they have set the bar so incredibly high (or low) that it would have been impossible for Comey’s testimony to have an impact. Unless there is evidence even Sean Hannity would accept proving that Trump himself directly colluded with Russia to win the election (something that I myself have NOT concluded actually happened), then everything else is a big nothing burger in their glazed eyes.

Another is their belief that Trump didn’t actually give Comey a directive to end the investigation into former National Security Advisor Michael Flynn. I had one otherwise rational Trump cultist tell me on Twitter that even Comey never indicated that it was a “directive,” when that is the EXACT word that he used.

The two keys to understanding why what Trump did obviously was indeed a “directive” are that he went to great lengths to clear the room before making the “request,” and that Comey was fired once it became clear that he was not going to be “loyal” to Trump on this issue. Attorney Alan Dershowitz keeps saying Trump committed no crime here because he has the authority to end an investigation, but seems to forget that this is an investigation which directly involves himself and that he did NOT formerly end it, but wanted someone else to do his dirty work for him (it should be noted that Dershowitz also said that O.J. Simpson committed no crime).

One of the most aggravating Trump cultist’s Comey criticisms is that he should have quit or at least complained directly at the time if he thought Trump was inappropriately pressuring him and that, because he didn’t, he must be vindictively lying to avenge his firing. This leaves out the most important part of the entire narrative: There was no way for Comey to know for SURE what Trump was really up to until AFTER he was fired!

You can strongly suspect that your spouse is cheating on you, but unless you know for sure then you probably won’t leave them. In this case, the firing was effectively the final proof that Comey’s suspicions of “infidelity” were indeed valid.

My favorite irrational attack on Comey, one which was hilariously amplified by Trump himself via Twitter and his lawyer’s threat of a legal complaint, is that Comey is discredited because he leaked the contents of some of his memos to the New York Times. This is utterly laughable.

First of all, Trump’s lawyer incorrectly claimed that Comey got the timeline of events wrong because the The Times reported info that was in the memos before Trump’s infamous “there might be tapes” tweet. The memos are NOT referred to in that story, there are plenty of other ways the paper could have gotten the same information, and it would have been utterly insane for them not to cite the memos then if they had that kind of verification.

Secondly, the issue of how leaks work is one of many which the Trump cultists simply don’t understand (a reality Trump is all too happy to take advantage of, after all he “loves the poorly educated”). The only remotely rational argument I have seen for the “leaking” of the Comey memos to be illegal or even unethical is that the release of the documents themselves could be seen as FBI work product and might be somehow “classified.”

However, that did NOT happen in this situation. You see, The Times was so in love with the story they agreed to publish the contents of the memos based only on a Comey friend READING their contents to them (an arbitrary standard for sourcing of which I am skeptical). Therefore, no documents, classified or otherwise, were ever “leaked.” The proof of this is that if they had been “leaked” we would have SEEN them by now.

The leaking allegation is yet another complete red herring meant to distract Trump cultists from the real story here. It, of course, is working. After all, just like the beer made famous by Billy Dee Williams, with “Cult 45, they will believe him EVERY time.”