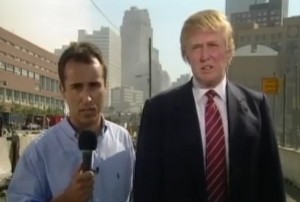 The attacks of September 11, 2001 have figured prominently in Donald Trump‘s 2016 presidential campaign, which has presented something of a dilemma for liberals who aren’t normally used to agreeing with a Republican frontrunner. Back in October, Trump became one of the first national media figures ever who didn’t give George W. Bush a total pass for the attacks, challenged the notion that Bush “kept us safe,” and quite movingly rebutted Ted Cruz‘ s “New York values” comments by recalling the values that were on display that day. Of course, he has also used the attacks to stoke fear of Muslims, and claims to have seen thousands cheering the attacks in Jersey City.

But a mere two days after the attacks, Trump was interviewed at Ground Zero by a German TV station, and the result is kind of amazing on several levels. Most starkly, there’s not a trace of the animus that has fueled his campaign to ban Muslims from entering the United States, no mention of those celebrating rooftop Muslims, just a characteristically monotone yet clearly shaken Trump trying to cheerlead New York back from the tragedy. Given the guff he’s taken over the cost of his proposed border wall, though, his prediction about the rebuilding effort is particularly noteworthy:

Reporter: What kind of cost would you estimate to rebuild this area? How much money has been lost in the attack?

Trump: I would say fifteen to twenty billion dollars.

Now, it’s only natural for a builder like Trump to predict a yuge, majestic replacement for the Twin Towers, but that estimate? It was kind of uncanny. Here’s the most recent estimate of the actual cost to rebuild the area: