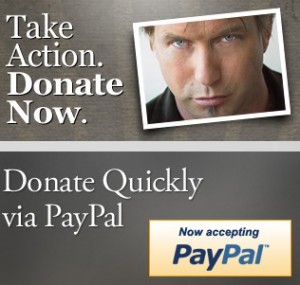 Calling someone a “charity case” is normally a metaphor for someone down on their luck. In the case of actor Stephen Baldwin the label has never been so apt. The Restoration of Stephen Baldwin is a newly formed website for fans to donate money in support of the actor since his recent bankruptcy filing. The cause for his money problems? His proud convictions as a born again believer in Jesus Christ, which has caused ridicule and financial ruin.

Over the last decade or so, actor Stephen Baldwin has evolved in status from successful Hollywood movie star, to punchline – if a comedian needs to reference an actor down on his luck, odds are that he’ll mention “the least popular of the Baldwin Brothers.” Baldwin believes this is due to his transformation to Born Again Christian, and has now set up a website where users can donate money to him. Because it appears that he really needs it.

Stephen Baldwin of the famous “Baldwin Brothers” Hollywood clan is a veteran actor who has starred in over 60 films and TV shows. He is no stranger to the Hollywood life of glitz, glamour and the public eye.

In 2002, he had an experience that changed his life forever. He became a Born Again Christian, giving his life to Jesus Christ. Over the next few years, he became very vocal about his faith, using his spotlight to boldly preach the gospel. However, because of his convictions it has caused him the loss of many jobs and the most recently, a highly publicized bankruptcy.

He has been publicly ridiculed and insulted by people who think that he has been abandoned by God. A simple search through the internet will reveal that people not only mock Stephen, but mock God.

In response to this (with the permission of Stephen’s ministry President Daniel Southern) we have established RestoreStephenBaldwin.org. A privately funded and managed website. Our vision is to see Stephen Baldwin publicly restored in front of millions. Stephen’s platform will increase allowing him to reach even more people with the Gospel and God will get all of the glory. Publicly.

Following is a video from his website in which Baldwin is compared to Job (no, not the dimwitted Arrested Development character Gob, but the Old Testament guy):