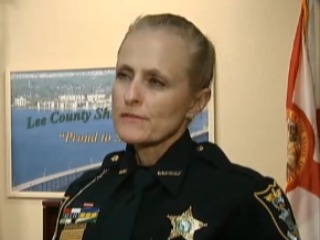 Quiz time: After two 12-year-olds were found kisings on the school playground, an administrator at Lee County, Florida’s Orange River Elementary School called… The students’ teachers? Their parents? A squad of ruler-wielding nuns?

The school had called law enforcement, as FoxNews.com reports, on the advice of the Florida Department of Children and Families:

Lee County Sheriff’s deputies were dispatched to Orange River Elementary School after two female students were debating over who liked a 12-year-old boy more. At that point, one of the girls walked over and kissed the boy – leading an assistant principal to call authorities.

The administrator initially contacted the Florida Department of Children and Families. However, DCF told the school that they needed to call local law enforcement.

“They called us and said they caught two children kissing on the playground,” Sgt. Stephanie Eller told Fox News & Commentary. “The reality is it was probably something innocent between two kids on the playground.”

Police officers assessed the information, and no arrests were made. At worse, they concluded, the offending student could have been charged with battery for touching an unwilling partner. Sgt. Stephanie Eller told Fox News that she documented the incident because “we don’t know, at this point, whether or not there is a bigger picture that somebody needs to be looking at.”

Have a look at the report, via Fox News: