‘This Is Not a Crusade’: Jim Acosta Says Trump Criticism Is ‘Journalism’ and ‘Not Partisan’ 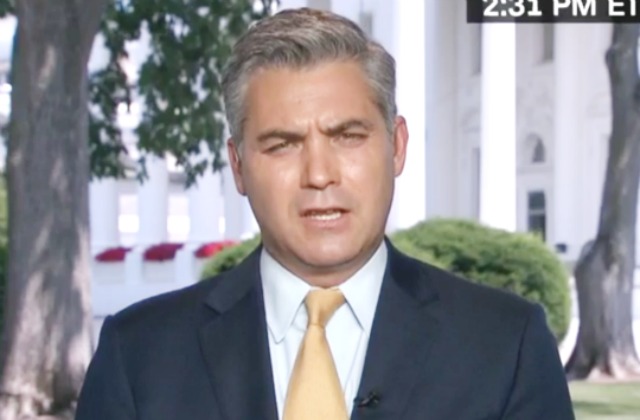 This has led to some pushback against Acosta from the White House and Trump loyalists. Fox News host Sean Hannity has taken aim at Acosta on Twitter and recently devoted a TV segment on the journalist in which he called the reporter “unhinged.” Meanwhile, White House counselor Kellyanne Conway said Acosta’s comments on Trump are “unfair” and brought up recent controversies at CNN to brush them off.

In an interview with the Washington Post, Acosta defended his recent actions, describing them as being part of his job:

“I think I’m just covering a story, honestly,” Acosta says in a call from Germany, where he has been covering the president. “When the president of the United States calls the press ‘fake news’ and ‘the enemy of the American people,’ ” he adds, “I think that’s when you have to get tough and ask the hard questions.”

The Post noted that Spicer has essentially called Acosta a grandstander who is just trying to make a name for himself while also highlighting that Acosta hasn’t garnered widespread support from other White House reporters. At the same time, CNN has stood by Acosta, calling him a “fantastic reporter.”

With it being pointed out that Acosta was also pretty tough on the Obama administration, pressing them on issues like the IRS scandal and President Obama labeling ISIS the “JV team,” the CNN correspondent explained he is just being who he’s always been.

Acosta says today the president and the issues have changed. But he hasn’t. “This is not a crusade,” he says. “This is not partisan. This is journalism. We’re trying to hold them to account.’”