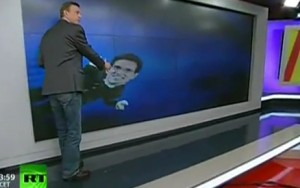 Liberal radio and TV host Thom Hartmann took President Obama‘s homework assignment at last week’s press conference to heart, scouring the country for a Republican jobs plan. He found one in Florida’s HB 4063, a law that would repeal a longstanding ban on dwarf-tossing. State Rep. Ritch Workman (R-FL30) says, “All we really did by passing that law was take away some employment from some little people,” calling it an example of “Big Brother government.”

Hartmann uses the law to illustrate how little the Republicans in congress have done to create jobs since they took the House in November.

“Watch for Eric Cantor and the Tea Party to seize on this idea and push for a tax credit for sword swallowers and federally subsidized job training for snake handlers,” Hartmann says. “Under the Republican job creation plan – instead of a nation of manufacturers – we can be a nation of carnies.”

One part of the segment that’s sure to be controversial, though, is Hartmann’s disposal of House Majority Leader Eric Cantor, whom he…well, just watch:

Hartmann should just be glad this isn’t the UK, where “dwarf tossing” carries an entirely different meaning.

As hard as Hartmann tried to give Republicans credit for trying to create jobs, the bill’s author is having none of it. After Workman’s bill got some national media attention last week, he strove to clarify that the bill actually wasn’t a jobs plan.

“I said, ‘Why would you take away jobs from somebody who wanted them? That’s gotten a lot of play,” he told Florida Today. “It’s not a jobs bill, and has nothing to do with that. But it has everything to do with this: When I came across this law on the books it came across to me as Big Brother legislation. That’s not the kind of government I want to be a part of.”

Workman contends that dwarf-tossing is “illegal merely for offending some people,” but a reading of the actual law tells a different story:(emphasis mine)

The division shall promulgate rules, to become effective no later than October 1, 1989, to prohibit every person maintaining, owning, or operating a commercial establishment located within this state at which alcoholic beverages are offered for sale on the premises, from undertaking or permitting any contest or promotion or other form of recreational activity involving exploitation endangering the health, safety, and welfare of any person with dwarfism. For the purposes of this section, the term “dwarfism” means a disproportionate or proportionate short stature most often caused by a genetic syndrome. The division may suspend or revoke the license of and may impose a civil penalty not to exceed $1,000 against any person in violation of any rule promulgated pursuant to the provisions of this section…