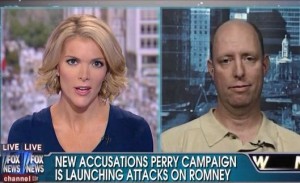 On Friday, Robert Jeffress, a Rick Perry supporter and senior pastor at First Baptist Church in Dallas, Tex., told reporters that he considers Mormonism a theological “cult.”. This came after he introduced Perry to the assembled crowd at the Value Voters Summit. At least one person now thinks that Rick Perry’s camp orchestrated the comments. Scott McLean, a political scientist at Quinnipiac University, told FoxNews.com’s Stephen Clark that it makes perfect sense to him:

“Rick Perry cut his teeth with Karl Rove,” McLean said “Rove knows when you go on the attack, make sure a surrogate does it for you. Rick Perry followed that script to the letter.”

McLean clarified his comments Monday afternoon on Fox News with Megyn Kelly, saying that he had no direct evidence that Perry was behind the attacks, just a great deal of suspicion:

Perry’s camp quickly pointed out that they didn’t choose Jeffress to introduce their candidate (he was selected by the VVS and approved by Perry) and that they didn’t believe Mormonism was actually a cult. This doesn’t seem to be on the same level as Barack Obama‘s Jeremiah Wright problems from the 2008 campaign just yet–Jeffress didn’t marry Perry and his wife, for instance, and has yet to denounce America–but the issue could still backfire on Perry if, say, McLean’s suppositions are misinterpreted as fact and a series of pastors begin calling out Mormonism as a cult over the next few months.

The action, regardless of where it came from, may have already hurt Romney among Christian groups. McLean pointed out to Kelly that, “higher percentages of frequent churchgoing Protestant Evangelicals have a more unfavorable view of Mormonism than the rest of the country. And this is something that affects their vote.” So the fact that someone is even bringing up Romney’s religion serves as a reminder to the Evangelicals that Romney is a Mormon. And that is exactly, McLean explains, what the Perry camp eventually wants.

It also gives occasion to reflect on the campaign of Jon Huntsman, the other Mormon vying for the GOP nomination. He told CBS that the controversy was “the most ridiculous sideshow in recent politics.” Although with many outlets making this solely a Romney issue, it might not be a bad idea for Huntsman, who is polling at 4% in the most recent Zogby poll, to maybe plant a pastor of his own somewhere to keep making Mormon comments, so he can rail against them and remind everyone that he’s still in the running.