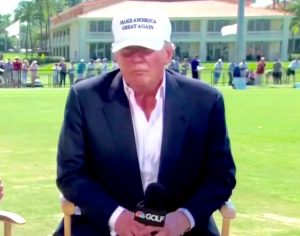 Three democratic Senators sent a letter on Monday to Mike Davis — the executive director of the United States Golf Association — calling on the organization to move the 2017 US Women’s Open from the Donald Trump-owned Trump National Golf Club in Bedminster, NJ.

Senators Richard Blumenthal (D-CT), Edward Markey (D-MA), and Bob Casey (D-PA) signed their names to the letter, which cites comments the republican presidential nominee made on the leaked 2005 Access Hollywood tape as grounds for the prestigious tournament to be moved.

“In declining future association with a brand that degrades women, the USGA and LPGA have an opportunity to make clear to the world, and most especially young Americans, that our nation will not tolerate nor do business with any company that condones or excuses action that constitutes sexual assault,” the letter read, according to USA Today.

Logistics make such a late move very difficult, if not impossible. The US Women’s Open has already chosen its sites through 2021, and the planning for each tournament often takes several years.

Trump has spent years lobbying for male and female major championships to be awarded to his courses — particularly Trump National, which is considered by many to be the most difficult course he owns.

The PGA Tour recently moved a 2017 World Golf Championships event from a Trump course in Miami to Mexico City. The Miami course, Trump National Doral, had been a PGA Tour staple for decades.

Trump National is, at the moment, still slated to host the 2022 PGA Championship — which would be the first men’s major championship to take place on any of his courses.