Thus Far, Only .6% of Obama’s Funny or Die Viewers Converted to Healthcare.Gov 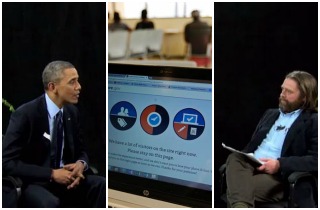 On Tuesday, President Barack Obama appeared on the Funny or Die series Between Two Ferns with Zach Galifianakis where he touted the benefits associated with enrolling in the Affordable Care Act to the program’s presumably younger audience. By mid-afternoon, White House Press Sec. Jay Carney revealed that the video was wildly popular, netting 3 million views over the course of one day and resulting in a spike in traffic to HealthCare.gov.

But the Department of Health and Human Services threw cold water on the administration’s figures Tuesday afternoon during a call with reporters. They noted that, of the people who watched the Funny or Die video to the end where they were presented with a link to Healthcare.gov, only 19,000 followed the link.

RELATED: Guess Where Healthcare.gov’s Traffic Is Coming from Right Now

This figure says nothing about how many of the converted Healthcare.gov visitors attempted to enroll in the program. HHS conceded that the pace of enrollments slowed in February and the number of young enrollees is below the targets set at the program’s launch. They further disclosed that 4.2 million Americans had signed up in some form for the ACA’s benefits, but an HHS memo published weeks prior to the program’s October 1 launch projected 5.7 enrollees by the end of last month.