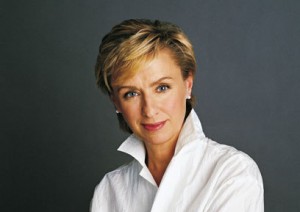 Tina Brown isn’t too worried about bloggers weighing in on her latest project – remaking the ailing Newsweek brand into something people will read, discuss and pay for. In an interview with The Guardian, Brown takes the criticism hurled her way (which includes a rather unfortunate and problematic comparison to a hagfish by Gawker editor John Cook) in stride:

Snark is the medium of the day. I don’t have Google alert because it just distracts the brain. At the end of the day, we have bigger things to worry about than that, quite frankly. We have a magazine to remake.

(It is noted, in the interview, that Brown prefers her omelets with egg whites and her toast without butter – either because it shows her restraint and discipline, or because it is assumed that people are curious about what it is that famous women eat for breakfast. The answer is: The weak.)

Brown notes the challenges of working with a “legacy brand” like Newsweek (its latest issue, the first to feature its redesign, has Secretary of Sate Hillary Clinton on its cover): “Not that the Beast was easy but it was unencumbered. There’s a legacy at Newsweek but . . . I have an appetite for it. I really do love journalism.”

One thing that sets Brown apart from other publishers, online or otherwise, is that she’s willing to pay for good content – in the Daily Beast’s case, that means $350 per article:

As a writer myself, I cannot look other writers in the face and ask them to do things for nothing. In the same way, I wouldn’t ask my dentist to give me a free filling. Writing is a profession and you should have respect for that and should pay for it.

This predictably draws a comparison with the woman long painted as Brown’s “frenemy” – friend and rival Arianna Huffington, whose pay model differs quite a bit from Brown’s. Brown simply refers to her as a “very old girlfriend” of 30 years whose work and tenacity she admires.

When asked why, unlike her pal Huffington, she chose not to have her name on her website, Brown replied that such a thing would work to diminish the work put in by all the site’s contributors.

It’s a nice sentiment, surely, but one benefit of having one’s name on one’s website is that it capitalizes on a famous individual’s cult of personality. Brown, despite or because of the variety of reactions she inspires (see: “hagfish”), draws interest. She’s now, for better or worse, the face of both the Daily Beast and Newsweek, and perhaps both brands could benefit from serving as, basically, brand extensions for Tina Brown, Inc. She says what people want to hear – She pays her contributors! She respects the group effort responsible for her site’s content! – she’s contentious enough to draw comparisons to horrific forms of sea life (What woman could ask for more?), she has famous friends and she’s tough. Why not add more Tina, especially given most would rather read about the journalist / business woman than pick up Newsweek? Sure, an emphasis on quality content and accessible means of providing information and entertainment to readers will help, but where is Newsweek‘s competitive edge? Newsweek has been, as Hot Air aptly described it, “oatmeal in a silver bowl” for too long. It needs a little (lot) more personality – namely, Brown’s. Then maybe, someday, we can read articles about Brown that still make note of her breakfast preferences, but don’t paint her as “that woman whose job is kind of like Arianna Huffington’s.”