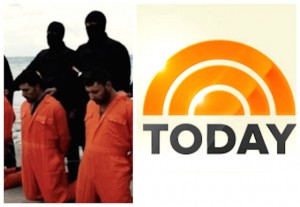 The beheadings of 21 Egyptian Christians in Libya was the lead story on cable news over the weekend regardless of which channel you happened to be watching. And rightly so, as ISIS seems hellbent on staying in the spotlight via highly-produced shock execution videos and one-upping itself (for lack of a better term) in the savagery department.

If ISIS ends up beheading 121 innocents next week while lighting them on fire, will anyone be surprised anymore? This is a terror organization that more Americans, Europeans and even the Arab world realizes needs to be annihilated swiftly. Comparisons to the Third Reich like the one Shepard Smith made two weeks ago are justly deserved. But until they strike here, it seems Americans — the kind who only watch the news casually and/or are too busy surviving day-to-day to notice — are apathetic about any news that doesn’t affect them directly. Seemingly sensing this, those who make editorial decisions at NBC, CBS and ABC on the morning news shows yesterday morning are adjusting their rundowns accordingly.

As expected, all the major cable news networks (Fox, CNN, MSNBC) continued to go heavy on ISIS on Monday, with coverage settling into the analysis/opinion department more than reporting side, which is always the case in this arena a day or two after a big terror story breaks. This coverage included MSNBC, with everyone from Morning Joe to Chris Matthews weighing in, the latter particularly passionately on Hardball… even for him.

But on NBC’s Today Show, it was all about making a business decision from a ratings perspective. So by more than a 10-to-1 margin, Today reportedly covered SNL‘s 40th Anniversary (which aired Sunday night) more than the Christian beheadings.

Given the reaction to SNL on Twitter (top trending) and the overall audience (23 million watched, including 7.8 million in the 18-34 demo, which is incredibly impressive given it was up against The Walking Dead and the NBA All-Star Game), showing highlight clips of SNL — which was tremendous — was a part of every morning program, cable or network. But when SNL exceeds ten times the airtime as the beheadings — a story so big that even the Pope is commenting on it — it’s now clear that any journalists who are left at 30 Rock are clearly losing the content debate to the bean counters in the corner offices.

Add it all up, and coverage of the SNL special garnered over 15 minutes of air time on Today, while the beheadings earned just under one minute and 30 seconds (Note: Today is a three-hour program). Good Morning America and CBS This Morning — obviously wary of giving a rival network too much airtime — only covered SNL for two minutes and 30 seconds (GMA) and four minutes, 27 seconds (CBS), but that was still more than both networks devoted to the massacre along the Mediterranean.

Oh, and if something important happens overseas next weekend, will next Monday morning be any different? Nope. Why? Because the Academy Awards will be held Sunday night and broadcast on ABC. Over 42 million are expected to tune in, or almost double the SNL Special. Outside of ISIS taking Baghdad or Putin ordering an invasion of Poland, expect more of the same “editorial” decision next Monday morning as well…only this time it will be ABC’s GMA going wall-to-wall on an entertainment event disguised as news.

Such is news landscape in the 21st Century. If it bleeds, it leads — except when lots of celebrities get together to celebrate something.