Charles Barkley Might Vote Republican for First Time Ever in 2016 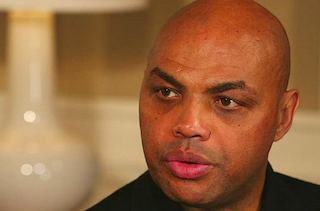 Former NBA all-star Charles Barkley has never been shy about sharing his often-surprising opinions and he did not hold back when Sports Illustrated’s Richard Deitsch asked him in a new interview published this week for his thoughts about the 2016 presidential election.

“I am paying close attention to the political situation,” Barkley said. “I have always voted Democratic. But I like some of the Republicans this time around. I like Chris Christie. I like Jeb Bush. I like those guys.”

Asked about Hillary Clinton, Barkley laughed and said, “Well, I just told you I was thinking about voting Republican.”

“But I was very disappointed in Chris Christie the other day on the measles thing,” he said, referring to the New Jersey governor’s comments about vaccinations. “It is a shame that these guys are afraid of just answering the question and trying to make everyone agree with you.”

Barkley said he did vaccinate his daughter but did not appreciate how Christie started to change his position once he received “blowback” from the media. “I’m like, dude, your opinion is just your fucking opinion,” he said. “I don’t understand why you answer a question and think everyone is going to agree with you. You can’t live your life like that.”

Later, Barkley picked an unlikely name for the living person he would most like to meet: King Abdullah of Jordan. “Because I think his actions when they (ISIS) burned that kid [a Jordanian military pilot] alive, I thought his actions were heroic,” he said “He was like, ‘No, you cannot do that to my people.’ I wish President Obama was like that sometimes. I do. I think that is the way we have to treat ISIS. We can’t keep thinking it will go away.”

Over the past year, Barkley has expressed a range of opinions that don’t exactly line up with those of the Democratic Party, taking heat for calling out “unintelligent” black people and defending Ferguson Police Officer Darren Wilson by saying, “if it wasn’t for the cops we would be living in the Wild, Wild West.”

[h/t The Hill]
[Photo via screengrab]