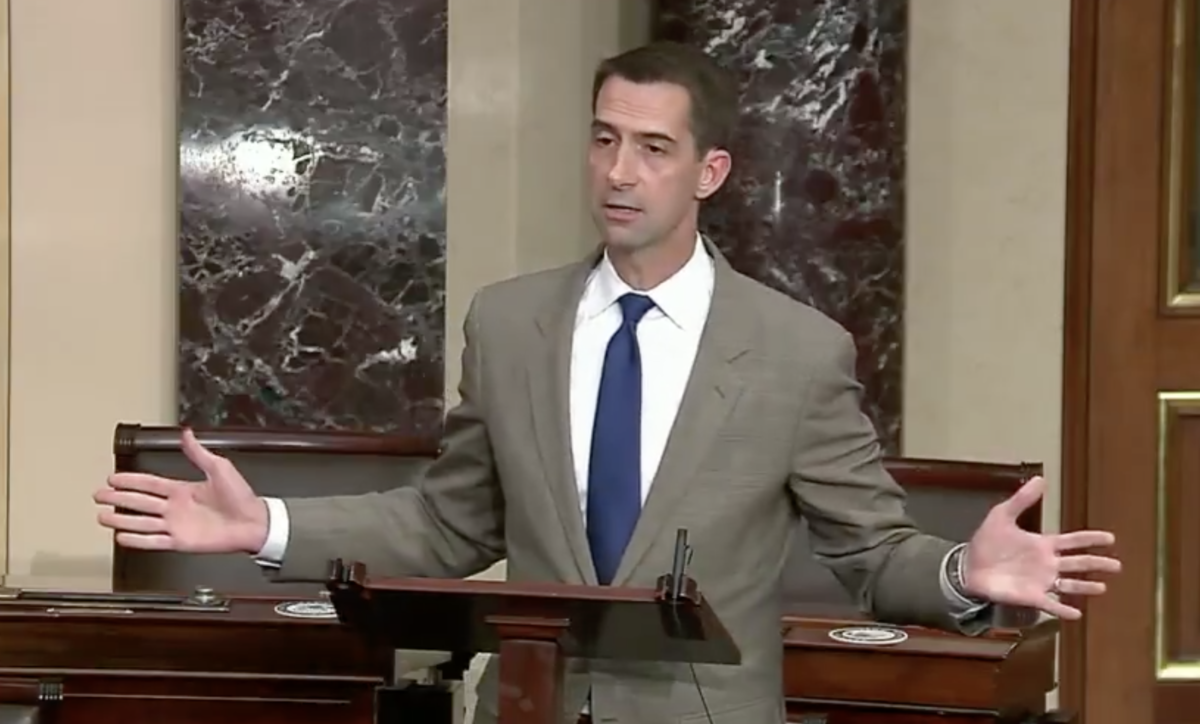 Sen. Tom Cotton (R-AR) was mocked for a rant in Congress on Thursday that hysterically warned the Washington Monument might be renamed the “Obelisk of Wokeness” as part of a campaign of political correctness run amok by the left. Almost instantly, the phrase went viral — but not in the laughing-with-you kind of way.

Cotton has been in the news since his New York Times op-ed entitled “Send In The Troops” led to outrage from the Times staff, changes to the publication’s opinion workflow, and, ultimately, led to editorial page editor James Bennet’s resignation.

On Thursday, Cotton went on a tirade in the Senate that began with denouncing “cancel culture” and quickly turned into the senator reciting those cultural programs “who aren’t safe” from the “woke mob.” A&E’s recently cancelled Live PD, the Nickelodeon kids’ show Paw Patrol, and Gone With The Wind, which HBOMax recently pulled out of its online catalog, were among the many victims called out by Cotton.

The woke mob never misses an opportunity to be offended.

What will they cancel next? pic.twitter.com/JNZUJDxz0T

“The idea that we all need safe spaces from mean words,” Cotton said. “Trigger warnings on op-eds or TV shows that might constitute a microaggression. This is the language of the campus social justice seminar but increasingly it’s the language of our workplace.”

Fact: The Obelisk of Wokeness is the world’s tallest and wokest obelisk. Originally called the Washington Monument it was renamed to celebrate the defeat of Donald Trump & his racist minions in 2020. https://t.co/kgibOPybmB

You have to admit that Obelisk of Wokeness sounds cool as hell https://t.co/bBcVDcE3eR

Obelisk of Wokeness
+5 to hit against fucking nerds https://t.co/WtLZBw00Tv

No Tom. We can always shove it up your….
Back to our regularly scheduled program ..
“The Obelisk of Wokeness” sounds like an album the B52s regretted recording.#symbolicsvssystemics https://t.co/5EzUr73DDw

I’m pretty sure Obelisk of Wokeness is favored to win the Preakness this year.

we will offer up sacrifices to the Obelisk of Wokeness https://t.co/eDT9mrsRZj

— Matt Binder worships at the Obelisk of Wokeness (@MattBinder) June 12, 2020

Obelisk of Wokeness is the title of my sex tape. BOOM https://t.co/hgCMXUdV8k

Omg @TomCottonAR, you mean the Obelisk of Wokeness right next to Tidal Basin of No Quarter? https://t.co/Ugbn08DAMP

I can just imagine the teachers yelling “STOP pretending that the Obelisk of Wokeness is your penis, Jeremy” https://t.co/KQAM6QNlYk

Obelisk of Wokeness sounds like the name of a mid-00s alternative punk band I’d be interested in listening to https://t.co/KbwYovKLQk

I kept close tabs on Tom Cotton’s 2014 campaign while I lived in Arkansas and I can confidently say that this is pretty much the way he has always been. https://t.co/TeHmMOZjrx

Starting a metal band named Obelisk of Wokeness and our first single, “Fascist Scum,” will be dedicated to Tom Cotton. https://t.co/swaqBrdSJO

“Get in loser, we’re going to obelisk of wokeness” pic.twitter.com/PxLJ3BZa6T