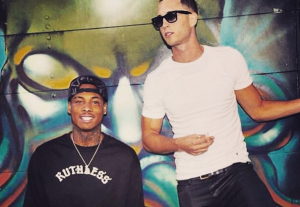 Tom Hanks‘ son Chet Hanks, whose chosen rapper name is Chet Haze (because it’s so very different from his given name), has found himself in the middle of yet another Internet controversy. The topic this time? His use of the n-word on Instagram, and whether or not he should be using the racially-insensitive term — despite its popularity among African-American hip hop artists.

As VH1 points out, Haze’s recent use of the word began with a post celebrating a recent musical collaboration. Haze wrote, “Check out the song me and my n—- @chillthatdude just dropped on my Soundcloud #Juice LINK IN MY BIO #GoListen!!!”

Before the Internet at large was fully aware of Haze’s n-bomb, the white rapper posted a second image with a full paragraph about friends past and present. Specifically, Haze had harsh words for his detractors: “F— yall hating ass n—– I’ll never stop chasing my dream.”

By Monday, VH1 and many other music and online outlets had found and reported on Haze’s offending Instagrams. The posts went viral and, as expected, the response was overwhelming. So much that Haze addressed the controversy with a new video post on Tuesday. Here’s the video:

He also wrote a lengthy paragraph explaining why he doesn’t think there’s a problem with his using the word. Here’s the writing:

If I say the word n—- I say it amongst people I love and who love me. If I say “f— yall hatin ass n—–” it’s because that’s really how I felt at the time. And I don’t accept society getting to decide what ANYBODY can or can’t say. That’s something we call FREE SPEECH. Now I understand the older generation who grew up in the Jim Crowe era might have strong feelings against this. And that’s understandable… But what I’m saying is this is 2015… And even tho we are still far from where we need to be and black people are still being literally KILLED by a RACIST and f—– up system… We have also reached a point where the word can no longer have a negative connotation if we so choose. And who is to say only black people can use it? The way I see it, it’s a word that unifies the culture of HIP-HOP across ALL RACES, which is actually kind of a beautiful thing. It’s a word that can be used out of camaraderie and love, not just exclusively for black people. What’s the point in putting all these built up “rules” about it. It’s time to let go. You can hate me or love me for it, but can’t nobody tell me what I can or can’t say. It’s got nothing to do with trying to be a thug. It’s about the culture of the music. And that’s all I have to say about that (no pun intended) lol. It’s all love. Some people will get it, some people won’t. Either way, Ima keep living my life however the f— I want. ALL LOVE.

Despite the pseudo-history lesson, Haze leaves much out and assumes even more when trying to defend his use of the word. As Stereo Williams points out in The Daily Beast, a “white rapper like ‘Chet Haze’ needs to check his damn privilege.”

White privilege creates a culture where white youth — particularly those with means — are raised to inherently believe that the world is open to their every ambition. Without the barrier of structural, institutional, and cultural racism, they can realize those ambitions.

So it’s not just a matter of determining whether or not Haze is in a position to use the word. It’s also a question of privilege, whether or not his situation grants him access to means not available to others, and what culture(s) he originates from or inhabits in which such a word is used. The very comfortable home of actor Tom Hanks? Yeah, that’s privilege.

That, and history — something Haze really needs a better grasp of.