Top Chef Has Come Under Fire for Filming at a Plantation

Top Chef Has Come Under Fire for Filming at a Plantation 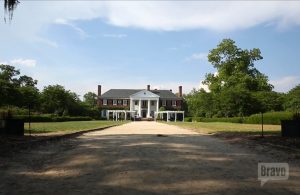 The first episode of Top Chef: Charleston filmed part of its episode, the Sudden Death Quickfire Challenge at Boone Hall Plantation, a former cotton plantation which is now open to visitors for educational purposes, events, and to serve as a reminder of what happened there.

Lots of viewers weren’t happy with the location choice, and they took to Twitter to express their anger and concerns:

Nobody would ever suggest filming Top Chef at Auschwitz. A plantation was viewed as appropriate and you’ve gotta think about why that is.

I still cannot comprehend why they’re on this plantation… I’m so glad I have some liquor in this house.. #topchef pic.twitter.com/qe8R28Rd9S

What’s up at #Bravo #TopChef? 1st the new season is in anti-LGBT
S. Carolina. 2nd they take 2 black chefs to an old plantation. #insensitive

So ends my viewership of #TopChef with the black man on plantation being eliminated to white man making truffle slave dish.

Never thought I’d say this but #topchef was a problem tonight. A plantation? Really?

Who thought the idea of a white guy vs a black guy on a plantation was a good idea? #TopChef

Tom Colicchio responded to the criticism, noting that slavery is part of Charleston’s history, and saying they wanted to paint a complete picture of the city. He also noted that, of course, it wasn’t their intention to be offensive.

Sorry we offended you. Places like Auschwitz and Boone plantation are open so we don’t forget how heartless people can be. https://t.co/C96jE0CS1l

we chose the location because we wanted to show the complete history of Charlesron. https://t.co/NSyE0D5s5o

We are shooting in the South I would think it odd if we ignored Charlestons History. https://t.co/ejiFYRcSj9

Colicchio has responded to a ton of tweets over the course of the last few days. It still remains to be seen how or if they will address the issue the rest of the season.