Touré Descends Into Self-Parody On The Cycle, Calls For Government Mandate Upon Mandate
VIDEO

Touré Descends Into Self-Parody On The Cycle, Calls For Government Mandate Upon Mandate 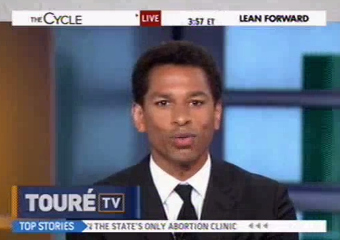 Last week, MSNBC’s The Cycle co-hosts Touré, Krystal Ball, and Steve Kornacki all suggested that America should institute compulsory voting as a way to guarantee a more well-educated public. And on Monday’s edition of the show, Touré was back at it again, spending an entire segment describing all the paternalistic (his words!) laws he’d like to see our government pass.

“Many Americans say they’re unhappy about the health care law, but the the popularity of the law is something of a red herring,” he began his monologue. “Sometimes, government must lead. Sometimes, government must demand people accept change they’re not yet ready for. Those are the moments when leaders with vision can change society and create the crescendos of history. In freeing the slaves, desegregating schools, enacting Title IX, and legalizing gay marriage, government led America into a new world much of the country wasn’t ready for, but in time, we adjusted. And this too shall pass.”

Touré does realize that three of those four examples of “government leading America into a new world” were government having to reverse policies put into place and enforced by a paternalistic government, right?

Slavery? Couldn’t have existed without the authority of government defining slaves as the property of their masters. Oh, and then after slavery ended, government created something called Jim Crow laws. Desegregating schools? Yeah, state government laws enforced the segregation of public schools in the American South. And legalizing gay marriage? Um, yeah, it took a paternalistic government to define/ban certain types of marriage.

– RELATED: Today’s Paternalistic Nonsense: 3/4ths Of MSNBC’s The Cycle Want To Force You To Vote

Anyway, you were saying, Touré…

“Government must pull us into the future even as a large swath of the electorate kicks against and screams against it like petulant children.” He continued on to say that opposition to the health-insurance mandate will fade over time because “the people are sometimes like Mikey from that old Life cereal commercial; they hate it until they don’t.”

Seriously? “The people” … are like the petulant child from a cereal commercial? What condescension. You almost want to believe this some elaborate theater act where Touré parodies the quintessential “holier than thou” big government liberal. But maybe not. He continued on:

“Perhaps if there’s a second term for Obama after health care is enacted and people see it working well and get used to it, he’ll float to a new level of power.”

Yeah! If and when the unwashed masses accept the president’s health-insurance mandate, he’ll float to some magical new level of executive power, uninhibited by those pesky obstacles like, you know, the constitution or democracy or, ugh, personal liberty.

And on this Cloud Nine of Power, what would Touré like President Obama to do?

“Maybe he’ll go even further trying to bolster his legacy by enacting new paternalistic mandates meant to make the nation better. Saying all Americans must vote, because government works better when all participate in selecting leaders. Eat your vegetables! Maybe mandate that all citizens must go to some sort of post high school college — maybe liberal arts, maybe technical — because America works better when we are better educated and trained. Eat your vegetables! How about a mandate of a year or two of public service after college?”

This had to be a self-parody, right? He even mockingly said “eat your vegetables” after each mandate, as a reference to critics of the health-insurance mandate saying it’s like a government-enforced broccoli mandate. He can’t seriously want to mandate all of that stuff, right? That would just be too paternalistic.

It’s still unclear, so let’s hear what other mandates he suggested:

“Mandate extensive pre-marital counseling and maybe even a review board that can determine whether or not a couple can get married, and pre-divorce counseling to try and save marriages, because teaching relationship skills is critical to building strong nuclear families.”

Oh, lord. Based on this and last week’s paternalistic nonsense, I have a feeling this was not parody.

If someone were to effectively parody a liberal, what obvious line would come out of their mouth? Something like “the people don’t know what’s best for them,” right?

You have to wonder whether Touré, a vocal opponent of the War on Drugs, realizes that a paternalist like himself would say the same thing as a reason why government must protect marijuana smokers from themselves.

Either way, please let this be a self-parody. Otherwise, Touré’s cluelessness is frightening.