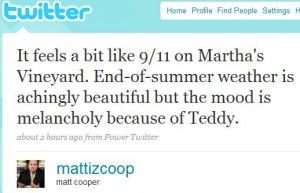 Revealing thoughts, particularly abstract emotions in only 140 characters can not only be challenging, but can lead to misinterpretation, and in some cases outrage.

TPM’s Matt Cooper caused a minor Twit-storm, this afternoon, when he posted this bit of reflection on the mood in Martha’s Vineyard:

It feels a bit like 9/11 on Martha’s Vineyard. End-of-summer weather is achingly beautiful but the mood is melancholy because of Teddy. about 2 hours ago from Power Twitter

Any thinking, feeling human being who remembers that morning knows exactly what he’s talking about. I recall standing outside, grabbing a smoke before my 2nd day on a new job, and looking across the river at the towers where my Dad used to work, and thinking, “This has got to be the most perfect day I’ve ever seen.” It was sunny and beautiful, with a cool, gentle breeze.

20 minutes later, it felt like the end of the world, of course, but that’s obviously not what Cooper was trying to capture. Try telling that to the Twitter trolls who immediately forced an unnecessary apology out of him.

Worst of all was this tweet, from someone whose reverence for 9/11 extends only to the point at which he can shame Matt Cooper, then disappears at an opportunity to crack wise:

In other Kennedy comparison news, the right continues to compare the death of Ted Kennedy to that of columnist Robert Novak. Any time a conservative reacts poorly to Ted’s death (as opposed to the many appropriate responses), I immediately hear the “Novak Defense,” which states that it’s all OK because some trolls were jerks about Novak’s death.

A more novel, but no less ghoulish, scorecard has been set up over at Hot Air, where they are tabulating mentions of Chappaquiddick against those of Plamegate, fastidiously noting in which paragraphs the mentions appeared. Maybe they should include, in their “study,” mentions of Michael Jackson’s “PYT” as a control.
I think Meghan McCain summed it up beautifully: (h/t Air America)

I just don’t know what kind of life of anger you lead if you can’t put politics aside for a moment to respect a mans passing… 8:05 PM Aug 26th from txt