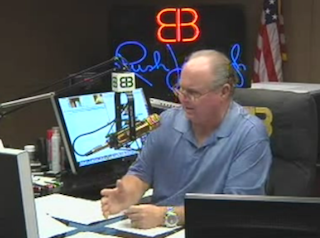 All in all, Rush Limbaugh thought last night’s debate was a “good night for Conservativism” with every debater having good moments. He wasn’t, however, that thrilled with the media’s response to and handling of the event. While Limbaugh did warn that he would have to be “very measured and civil” in his criticism because everyone would hear it, he did take some shots, especially at moderator John King.

A number of news outlets have pointed out the candidates’ collective decision to adhere to Ronald Reagan’s 11th Commandment, however, Limbaugh argued that the media is furious about this because, for all their talk of a new age of civility, the press hates candidates being nice. Even moreso, though, Limbaugh believes they hate Conservative candidates being nice to each other and attacking President Obama. “They’re upset because the attacks on Obama were effective,” Limbaugh said.

The person who got the harshest comments (while “measured and civil”) though was King. Limbaugh accused King of “coming alive” when talking about abortion and gay marriage because those were his chances to really “get” the Conservative candidates. He also took exception with King’s silly “This or That” segment and the radio host does have a point there. While it’s nice to see these people as, well, people, in that moment, King seemed less like a moderator of a presidential debate and more like a dorm RA on the first day of college: “Hey, guys! Lets do some ice breakers!”

Mostly, though, Limbaugh was pretty happy with the night.