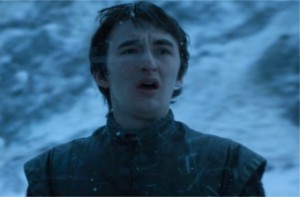 Spoilers for Game of Thrones Season 6, Episode 5: “The Door.”

Well, we now know how Wylis — the lovable old lug of Winterfell — acquired his nickname and sole vocalization, “Hodor.” By some mechanism of warg magic, Bran induced in young Wylis a premonition of his future, his final day, and his dying deed: to “hold the door” against a throng of undead wights. This induced a seizure and an apparent trammel on Wylis’ mental faculties as he was then cursed to repeat the same two syllables forever, the saddest portmanteau in history: “hodor.”

It’s a nasty slap in the face, and a canny tragic twist: to take one of the more disposable running gags of the story (dumb giant can only say one word, hah hah) and use it to reveal that a character’s fate was sealed from childhood, and what’s worse, he was doomed to spend the rest of his entirely circumscribed life, unsuspiciously repeating an incantation that was a herald of his own demise. Well done, George.

If the show’s previous season seemed sometimes to be killing time, “The Door,” like last week’s “Book of the Stranger,” is possessed by an urgent need to dispense with omens and digressions and get down to the dirty business of putting people where they need to be for the final battle. Even if that means, like Wylis, you get flayed alive by zombies.

This is perhaps informed by the fact that the show now has a concrete end date. But whatever the reason, the narrative pace has refreshingly accelerated, and the fifth episode of season six capped off an hour of revelations and reconfigurations, as the characters struck new alliances and made new discoveries in a renewed push toward an endgame that feels increasingly less abstract.

Considering that Thrones once strategically abjured flashbacks, “The Door” represented the show’s most exhaustive excavation of its own history in some time, taking us back to Season 1 (in the form of a ribald satirical stage play), back to the Winterfell of Ned Stark’s childhood, and — in one of the more surprising moments — to the very beginning of the longest of the show’s long games: the origin of the White Walkers.

The prehistory of Westeros has gotten relatively little airtime on the show. If, like me, you’re not a reader of the books, the volumes of history that shaped the continent thousands of years before the onset of the story can seem like something of a trivial distraction. The Dawn Age of Westeros has had little obvious bearing on Thrones, save that it provided lots of fodder for ominous monologues recited with breathy portent by British thespians. Until now.

With a flashback curated by the Three-Eyed Raven, we learn that the Children of the Forest (the continent’s native inhabitants) created the White Walkers in a desperate gambit to fight back the First Men (the initial migration of humans). There’s perhaps something disappointing in this revelation that the Walkers are not as absolute as we might have thought. Rather than being some elemental fact of this world, turns out the Walkers are just another political gambit that came crashing down on their inventors’ heads.

And so the show’s most catastrophically destructive, inhuman, and supernatural force of pure evil are, like everyone else, just actors in a realpolitik stage. Not some immutable embodiment of death and winter, but another faction in a war that’s been waging for millennia. The Lannisters have their blond hair and the Walkers have their blue eyes, but they’re all in the same game. In any event, it does seem to knock the Walkers down a peg and cast them in a new light. Maybe we should have seen this coming: After all, we know from Craster that the Walkers do have the capacity to strike strategic alliances.

Speaking of strategic alliances, we saw movement in several other subplots as various groups re-positioned themselves toward what I expect will be a grand detonation of conflicts by the season’s end.

Even the seemingly tangential narratives — like the political maneuverings in the Iron Islands — are being deftly woven back into the show’s grand scheme. When Euron Greyjoy stormed his way into the kingsmoot and declared the Salt Throne for himself, I was wary of another civil war narrative eating up the show’s precious remaining time. (Isn’t one Dorne enough?) But once he recited Daenarys’ name and promised to “seduce” her with a large fleet of ships, something started to spark.

“Across the sea there is someone who hates the lords of Westeros just has much as we do,” Euron said. Yes, and what he doesn’t know is that Dany is, at this moment, more than usually receptive to such an offer of maritime muscle. Recall that someone just torched the fleet of Meereen. And for all the strategic advantages conveyed by her newly acquired Dothraki army, they are not a seafaring people. Essos has worn out its welcome, and it’s my guess that the Unburnt is ready to set sail for (and scorch) new, unconquered lands. Euron’s timing could not be better. “Build me a thousand ships and I will give you this world,” he promises.

I’m not quite sure where this leaves Theon and Yara, who have set off with a band of loyalists and Pyke’s best ships, but my guess is they will align themselves with the forces currently being marshaled by Jon Snow and Sansa to take back the North.

But here’s where we might ask the characters, politely, to choose their battles. As bad as Ramsay Bolton is, shouldn’t Sansa’s attentions be focussed on the somewhat more pressing issue of the hoards of zombies about to descend on the Wall? Does Sansa even know about the Walkers? They were mentioned during the sit-down at Castle Black, and she didn’t raise her hand to ask for clarification, so I’m assuming that someone has filled her in on the undead issue. This is the problem with grading evil on a curve.

Meanwhile, across the Narrow Sea, Tyrion made his second deal with the devil in as many weeks. After securing a tenuous peace with the Masters of Astapor and Yunkai, he reached out to establish an accord with one of the dominant religions of the region: the Lord of Light. Of course, enlisting religious fanatics to your cause can go south quickly. Remember the Sparrows.

Just as Missandei and Gray Worm had cause to doubt Tyrion’s alliance with the Masters, so too does Varys have good reason to be skeptical of those who follow the Lord of Light. Recall that in season two, on the night the Blackwater burned he confided to Tyrion: “I have seen things, and heard things. Things you have not, things… I wish I had not… I don’t believe I’ve ever told you how I was cut,” referring to his mutilation at the hands of a “second-rate sorcerer” as the High Priestess of Volantis puts it.

He added that, “The dark arts have provided Lord Stannis with his armies, and paved his path to our door. For a man, in service to such powers, to sit on the Iron Throne. I can think of nothing worse.” If Danerys is about to align herself with such forces, Varys may have gone out of the frying pan and into… well, you get it. And here is hoping Tyrion’s recent streak of credulousness doesn’t end with him getting torched.

I really enjoyed the Braavosi send-up of Westeros’ royal drama. Arya watching the re-enactment of the scene she witnessed herself in Season 1’s “Baelor” was wrenching, and there’s wonderful irony in the fact that the closest she’ll likely come to scratching Cercei Lannister off her list is by killing the actress who embodies her onstage.

Also, scratch another direwolf. Summer went down with a whimper after gallantly fending off several dozen undead wights. By my count, that leaves two left: Ghost, who’s hanging out with Jon, and Nymeria, whom Arya let loose in the show’s second episode somewhere south of Winterfell rather than let her die at the hands of the Lannisters.

And Tormund and Brienne: 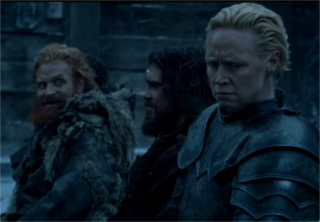