Trump and Obama Both Understand Political Importance of White Resentment

Trump and Obama Both Understand Political Importance of White Resentment 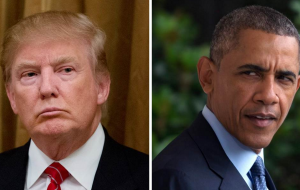 Donald Trump has completely taken over the 2016 presidential race, and may take over the entire country, if given half the chance. If you doubt this, consider that on Friday night, Trump drew a crowd of 30,000 to a rally in Alabama, and all three cable news networks not only carried the speech live, but broadcast extensive pregame coverage as well. Most mainstream political journalists have greeted this phenomenon by wearing out the phrase “taken up all the oxygen in the room,” and not at all understanding what it is that’s fueling it: white resentment.

Lest you think it’s just me and MSNBC’s Joy Reid, though, National Review Online’s Charles C.W. Cooke has been one of the very few political pundits willing to call it out when, on Friday night’s Real Time, he euphemistically chalked it up to “white identity politics.” Where he was wrong was in positing a Republican Party at a crossroads with white resentment, when in reality, they chose that path long ago.

This is no longer simply a case of Donald Trump making naked appeals to racism.  It started out that way, but Trump has broadened his appeal to more universal white resentments, like being the only people who are expected to watch what they say, a resentment which crosses party and ideological lines, or having their jobs taken by foreigners, which is another bipartisan gripe. If Trump wins, it will be by activating white people who haven’t been voting (which is about 35% of them).

But if Trump does manage to pull that off, he will be in the select company of another presidential candidate who also understood the political power of white resentment, and masterfully used it to break through. That was then-Senator Barack Obama.

It seems like a distant, soft-focus yesteryear now, but there was a time in this country when you couldn’t say that anything black mattered, not if you wanted to get elected. That was the America that Barack Obama was trying to become president of, and one of the biggest obstacles he faced was the fact that he knew a guy who was super-effing-black, like, hasn’t-gotten-over-the-Tuskegee-Experiment-black. His name was Rev. Jeremiah Wright, and the mainstream media helped wage a campaign to turn Obama radioblactive for ever having laid eyes on the man.

Just let that sink in for a second, because Donald Trump is the white Rev. Wright on steroids, and he’s riding high. Barack Obama almost had his campaign ended because he knew a guy who said way less offensive stuff than Donald Trump says with his own mouth. That’s our media.

It was against that backdrop that then-Sen. Barack Obama gave his now-famous speech on race, “A More Perfect Union,” and it was in the middle of that speech that I first knew he was probably going to win. In just three paragraphs, Barack Obama spoke to the concerns of resentful white people in a way that no candidate ever has before, or since, and he told them that it was okay:

In fact, a similar anger exists within segments of the white community. Most working- and middle-class white Americans don’t feel that they have been particularly privileged by their race. Their experience is the immigrant experience – as far as they’re concerned, no one’s handed them anything, they’ve built it from scratch. They’ve worked hard all their lives, many times only to see their jobs shipped overseas or their pension dumped after a lifetime of labor. They are anxious about their futures, and feel their dreams slipping away; in an era of stagnant wages and global competition, opportunity comes to be seen as a zero sum game, in which your dreams come at my expense. So when they are told to bus their children to a school across town; when they hear that an African American is getting an advantage in landing a good job or a spot in a good college because of an injustice that they themselves never committed; when they’re told that their fears about crime in urban neighborhoods are somehow prejudiced, resentment builds over time.

Like the anger within the black community, these resentments aren’t always expressed in polite company. But they have helped shape the political landscape for at least a generation. Anger over welfare and affirmative action helped forge the Reagan Coalition. Politicians routinely exploited fears of crime for their own electoral ends. Talk show hosts and conservative commentators built entire careers unmasking bogus claims of racism while dismissing legitimate discussions of racial injustice and inequality as mere political correctness or reverse racism.

Just as black anger often proved counterproductive, so have these white resentments distracted attention from the real culprits of the middle class squeeze – a corporate culture rife with inside dealing, questionable accounting practices, and short-term greed; a Washington dominated by lobbyists and special interests; economic policies that favor the few over the many. And yet, to wish away the resentments of white Americans, to label them as misguided or even racist, without recognizing they are grounded in legitimate concerns – this too widens the racial divide, and blocks the path to understanding.

If Obama gave that speech today, he’d be getting hollered at by #BlackLivesMatter harder than Martin O’Malley in an “All Lives Matter” t-shirt, but at that time, this is what white people needed to hear from the first serious black candidate for president. That speech didn’t convince any of the Republicans who already hated him, but that section of the speech resonated with every other white voter in the country, and it signaled that Obama was one of the good ones. Every white person has experienced these resentments at some point, even liberals, especially liberals. Look at the way the Bernie Sanders crowd responded in Seattle. White people hate to be called racist, or anything even close to it, and what Obama did was tell them that they weren’t.

It wouldn’t work in this political climate, but that doesn’t mean Obama was wrong. There’s this notion, in our media culture, that racism is this unforgivable sin, but the truth is that everyone is somewhere on the spectrum, between Klansman and, “Oh, shit, that’s actually not Morgan Freeman,” and the best thing President Obama did was to disarm that defensiveness. He knew that in order for his historic candidacy to succeed, it needed to not be an indictment of the people who had prevented anyone else from beating him to it.

President Obama got elected by confronting white resentment, and neutralizing it. Donald Trump is succeeding now because he is harnessing it, inflaming it, and normalizing it. The only question now is whether there are enough resentful white people to overcome the rest of America (including lots of non-resentful white people), and whether the rest of America will turn out to defeat Trump.