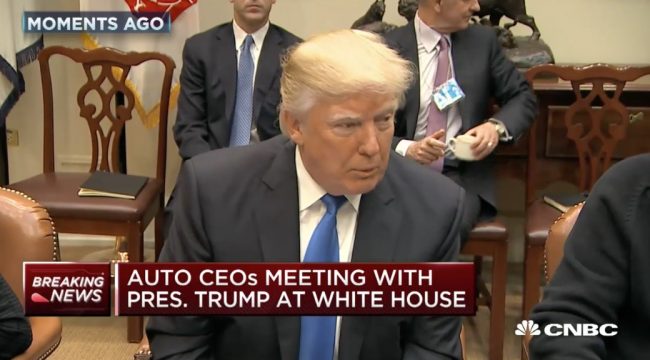 In only his fourth full day in office, President Donald Trump assured automotive CEOs Tuesday that the economic burden from tax and heavy regulations will soon be lifted in the spirit of promoting domestic manufacturing opportunities.

President Trump met with General Motors CEO and Chairperson Mary Barra, Ford CEO Mark Fields and Fiat Chrysler CEO Sergio Marchionne and emphasized the importance of U.S. manufacturing. Trump told the gathered press Tuesday morning, “We have a very big push on to have auto plants and other plants.”

The meeting came just hours after Trump tweeted, “Will be meeting at 9:00 with top automobile executives concerning jobs in America. I want new plants to be built here for cars sold here!” Reports indicate that the focus of the meeting was to ensure the automobile giants that tax cuts and deregulations would be hallmarks of the Trump administration.

Trump previously on the campaign trail called out Fields directly over Ford’s announced plans to build manufacturing plants south of the border in Mexico; the newly-elected Commander in Chief said over and over again that any company that manufactures elsewhere and attempts to sell products in the United States would be slapped with a debilitating 35% tariff, offsetting the gains accrued from cheap production costs.

Tuesday’s meeting with the automotive trio came just a day after the President met with other business leaders, including Elon Musk of Tesla Motors and Under Armor CEO Kevin Plank, to indicate that he wants to cut regulations by 75%, “maybe more.”

“We’re going to be cutting taxes massively,” he said Monday, “for both the middle class and for companies. And that’s massively.”

The optics of the two meetings are in line with his long-running campaign promise to put the interests of the American worker first; he repeated his promise during his inaugural address Friday afternoon, ensuring that an “America first” approach would ensure that the nation does not get taken advantage of by global trading partners.