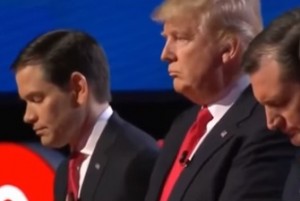 The uproar surrounding Republican presidential frontrunner Donald Trump‘s encouragement of violence at his rallies has reached a fever pitch in recent days, as well it should. Along the way, though, an interesting subplot has developed, as other Republicans try to denounce the monster that they spent 40 years creating. On Sunday’s edition of CNN’s State of the Union, Florida Senator and third-place Republican presidential contender Marco Rubio took that effort to the next level, and made a fascinating point in the process.

SOTU host Jake Tapper, who has expressed extraordinary concern about Trump’s rallies, asked Rubio if he thinks it’s possible that Trump’s campaign could lead to someone getting killed. Listen carefully to Rubio’s response, especially at the end (emphasis mine):

TAPPER: Would I be overstating matters if I said you sound like you’re actually concerned that somebody, before this is all over, somebody might lose their life?

RUBIO: I’m very concerned about that.

I’m very concerned. We don’t know what’s going to happen next here. I know that we have reached the point now where people in American politics have decided that, if they don’t agree with you, that they can get angry at you, that you’re a bad and evil person, that they can say anything they want about you…

On the one hand, it’s tough to disagree with Rubio, given that Trump’s rallies already resemble a cross between a Klan rally and a free concert at the Altamont Speedway, but Rubio’s response immediately evoked another issue which hasn’t seemed to have captured the media’s imagination in quite the same way Trump’s has.

Imagine, for a moment, that Rubio wasn’t talking about Trump encouraging people to punch protesters, and was instead tlking about these people:

Former candidate and current Ted Cruz surrogate Carly Fiorina is obviously the worst offender, but Ted Cruz and Marco Rubio also continued to spread the lie that Planned Parenthood engaged in the “sale” of fetal tissue “for profit,” a lie that has been debunked by investigation after investigation, a lie which, by the standard Rubio sets for Donald Trump, got three people killed and nine others wounded. Planned Parenthood shooter Robert Dear cited those false accusations after he committed his act of terrorism against a Colorado Springs Planned Parenthood.

Current Republican presidential cellar-dweller John Kasich doesn’t quite make the list because while he’s gone along with the smears, he has also taken care not to repeat them, but the two Republican contenders closest to beating Trump, and who are making the most noise about violence at Trump rallies, actively spread lies that, by Rubio’s reckoning, got people killed.