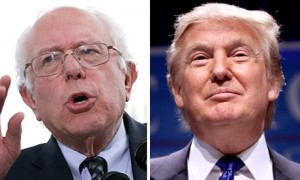 Donald Trump is following up his earlier Twitter attack on “sell out” Bernie Sanders with a second wave to remind him of what he said about the candidate he just endorsed.

Sanders appeared alongside Hillary Clinton today, where he endorsed her and called for Democratic unity ahead of the upcoming general election against Trump. The presumptive GOP nominee already sent the both of them a few zingers today, but now that it’s a done deal for the Sanders political movement, a few more are in order:

To all the Bernie voters who want to stop bad trade deals & global special interests, we welcome you with open arms. People first.

However, the pièce de résistance would probably be this video where he reminded the Twitterverse of what might have been the nastiest chapter in the Clinton-Sanders rivalry.

Obviously enough, this is a throwback to when Clinton and Sanders engaged in a week of mudslinging as they drilled each others qualifications for the presidency. Still, if Sanders’ latest tweet and today’s rally are any indication, it remains to be seen whether fences will mend and Clinton can successfully unify liberal America.