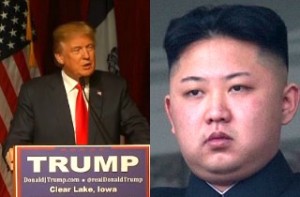 Donald Trump has picked some strange people to praise, from journalist-killing Russian President Vladimir Putin to Sandy Hook truther Alex Jones. Today might take the cake though, for during a rally today in Iowa, Trump offered compliments to the North Korean dictator who may have set off a hydrogen bomb this week.

Kim Jong-Un has once again put the world on edge due to reports from the Hermit Kingdom that his military stepped up their nuclear program by building and testing one of the most powerful weapons ever created. While Trump called Kim a “total nut-job,” the Toronto Star reported how Trump said that the tyrant deserves “credit” for taking over the country at a young age, even though he is known to have executed family members and top generals to further centralize his power, on top of everything else:

“If you look at North Korea, this guy, he’s like a maniac. OK? And you’ve got to give him credit: how many young guys — he was like 26 or 25 when his father died — take over these tough generals, and all of a sudden — you know, it’s pretty amazing when you think of it. How does he do that?”

Trump then answered his semi-rhetorical question: Kim, who was actually 28 when his father died, does that through executions.

This is not the first time Trump expressed this sort of thinking about the dictator, for RealClearPolitics noted how on On the Record, Trump previously said Kim “has got to have something going for him because he kept control which is amazing for a young person to do.”