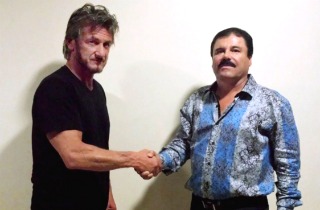 The notorious drug lord known as El Chapo was captured just days ago, and it turns out that authorities may have been helped by an interview he gave to Sean Penn.

Penn goes into great detail about the “clandestine planning” he underwent to finally get a chance to interview a man whose trust “was not to be fucked with.”

This was El Chapo’s first interview outside of an interrogation room, Penn says, and though he had concerns about his safety, Penn took comfort in knowing “unlike many of his counterparts who engage in gratuitous kidnapping and murder, El Chapo is a businessman first, and only resorts to violence when he deems it advantageous to himself or his business interests.”

When they finally met, Penn provides some insight into what they discussed:

He is interested in the movie business and how it works. He’s unimpressed with its financial yield. The P&L high side doesn’t add up to the downside risk for him. He suggests to us that we consider switching our career paths to the oil business. He says he would aspire to the energy sector, but that his funds, being illicit, restrict his investment opportunities. He cites (but asks me not to name in print) a host of corrupt major corporations, both within Mexico and abroad. He notes with delighted disdain several through which his money has been laundered, and who take their own cynical slice of the narco pie.

Rolling Stone also released some video of El Chapo answering questions on camera. One of those questions was whether El Chapo thinks he’s responsible for addiction. He said no, because “the day I don’t exist, it’s not going to decrease” drug trafficking.

You can read Penn’s full write-up of the interview here.