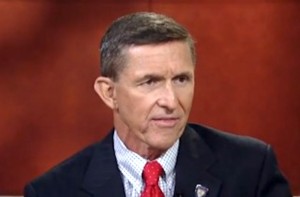 One of Donald Trump‘s staffers seemed to contradict what his camp previously said about the involvement of Michael Flynn‘s son with the president-elect’s transition team.

Michael G Flynn works as his father’s chief-of-staff, and both of them have been known to push anti-Hillary Clinton conspiracy theories and fake news. The younger Flynn has come under major scrutiny recently over his defense of #Pizzagate, an unsubstantiated story that led to actual panic this weekend at a D.C. pizza restaurant.

Mike Pence was on Morning Joe today, where he was asked about the fact that the younger Flynn had a government email address, suggesting a connection with Trump’s transition team. The vice-president elect insisted that the upcoming National Security Adviser’s son had “no involvement in the transition whatsoever.”

.@JasonMillerinDC confirms that Mike Flynn Jr. had at least some role in transition this morning on call with reporters, says “no longer.”: pic.twitter.com/UttrMKLXBH

“The younger Michael Flynn was helping his father with some administration and scheduling duties early on in the transition process and he is no longer involved with transition efforts.”

CNN’s Jake Tapper took note of this, particularly over the lack of clarification on the younger Flynn’s departure from the transition team.

Source won’t answer directly when asked if Flynn Jr was fired or asked to leave the transition team.

Even so, Kaczynski confirmed that the younger Flynn’s email account has been terminated.

Can report that Flynn’s son’s transition email has been shut down. Emails to it now bounce back.