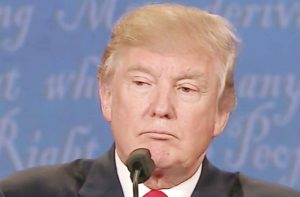 You know how this works. Donald Trump says something strange or controversial, Twitter mocks him for it, Queen to D5.

The real estate mogul had his final debate against Hillary Clinton last night, and when he wasn’t being open-ended on whether he’d respect the results of the election, he tried going toe-to-toe with her on the issues. Unfortunately, Trump’s performance left something to be desired, and quite a few debate watchers felt that his command of policy paled in comparison to Clinton’s.

Numerous Trump critics thought that he seemed so unprepared, that it was like watching a schoolchild give a book report when he clearly didn’t do his homework. The online trends seemed to begin after this tweet from St. Louis mayoral candidate Antonio French:

Trump's foreign policy answers sound like a book report from a teenager who hasn't read the book. "Oh, the grapes! They had so much wrath!"

From that tweet, #TrumpBookReport came into being. Aside from questioning Trump’s political intelligence, Twitter users used the hashtag to imagine what it would be like to get Trump’s take on the literary classics.

"TO KILL A MOCKINGBIRD? Believe me-if those mockingbirds had guns they wouldn't have been killed."#TrumpBookReport

That Giving Tree was a loser. It gave and gave and gave. Horrible deals. Ends up a stump. Schmuck. #TrumpBookReport

"When District 12 sends its people, they’re not sending their best. They're sending Katniss Everdeen. What a nasty woman."#TrumpBookReport

Look, I don't know Voldemort. He said nice things about me. If we got along with the Death Eaters, wouldn't be so bad. #TrumpBookReport

“We’re gonna catch so much rye, you won’t believe it. We’re bringing those rye catching jobs to America.” #TrumpBookReport @AntonioFrench

Anne Frank. What a loser. And she got caught. I like refugees that weren't caught. Okay? #TrumpBookReport

"Gatsby didn't win at anything. He was a loser in love, a loser at…he was a loser. I'll make Gatsby great again." #TrumpBookReport pic.twitter.com/XCzguafKAC

Dracula never attacked those women. No proof. Did you see what they looked like. Anemic for sure. #TrumpBookReport

I was against the war in Troy. Ask Hannity. And Helen was maybe a 6. She wouldn't have been my first choice, believe me. #TrumpBookReport

When you can't even listen to your classmate share their work because you already finished yours, aced it, graduated early. #TrumpBookReport pic.twitter.com/Sulgd6XlMV