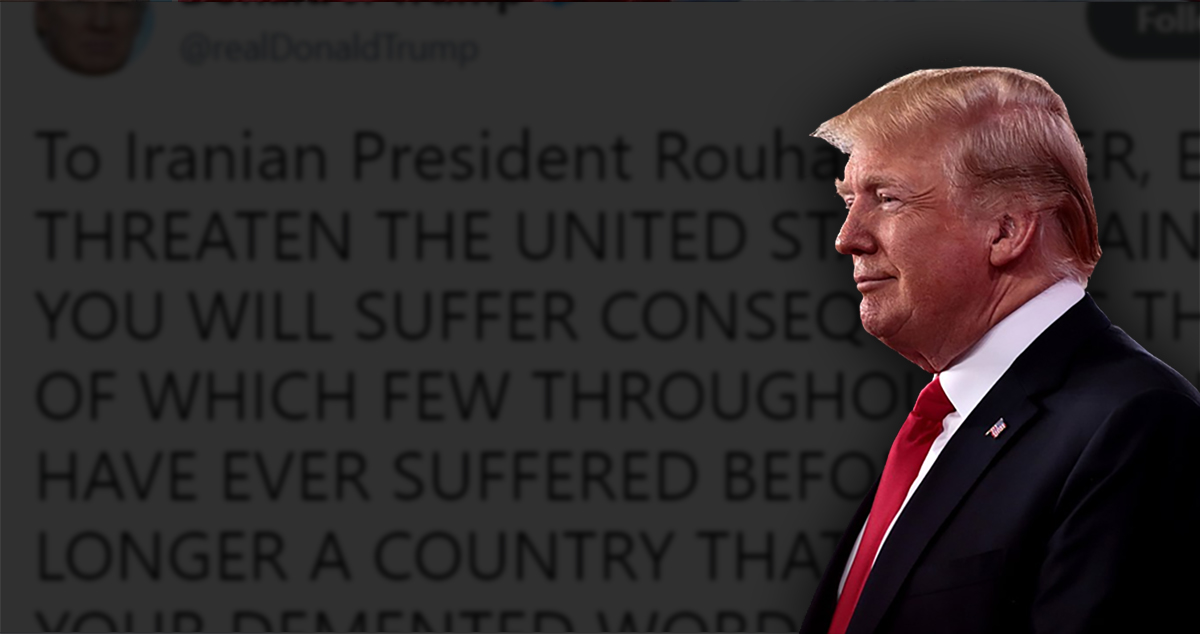 Overnight, President Donald Trump tweeted an all-caps warning to Iran never to threaten the United States again, or “suffer consequences the likes of which few throughout history have ever suffered before.”

The president’s tweet was in response to a threat from Iran’s President Hassan Rouhani, who on Sunday warned Trump directly in a televised speech that blocking Iran’s oil exports could lead to ‘the mother of all wars.’ Trump responded on Twitter, as he does.

To Iranian President Rouhani: NEVER, EVER THREATEN THE UNITED STATES AGAIN OR YOU WILL SUFFER CONSEQUENCES THE LIKES OF WHICH FEW THROUGHOUT HISTORY HAVE EVER SUFFERED BEFORE. WE ARE NO LONGER A COUNTRY THAT WILL STAND FOR YOUR DEMENTED WORDS OF VIOLENCE & DEATH. BE CAUTIOUS!

Given the timing of Trump’s tweet — it came at 11:24 p.m. on a sleepy Sunday night — it sparked groans of terror on journalists’s favorite social media platform.

wait is this real? https://t.co/mTVHLDyghT

@realdonaldtrump disrespects our troops by threatening a country that poses no threat to the US. @lpnational advocates peace, free trade, and diplomacy to solve international conflicts—and opposes jingoistic twitter trolling by reckless politicians armed with nuclear weapons. https://t.co/gqpGx7NjXk

I don’t really mind Trump warning Rouhani about consequences for Iran’s actions and rhetoric, but does he have to do it in a way that reads like a crazy troll flipping out over their favorite show getting cancelled? https://t.co/LrjEWghWgz

The American president just tweeted this. Not a parody account. https://t.co/M2GJ5GowEg

I think someone, in light of his recent performance, felt the need to appear “strong.” https://t.co/SEOXQTREJa

What the fuck are they showing on FNC tonight?

Holy shit guys, you gotta dial it back or we’re all dead. https://t.co/nZGG8qDcfd

Tbh if Trump sacked up and did this with Putin it would play so well for him https://t.co/4st0O1CSgw

Based on the precedence of “fire & fury” leading to North Korean talks, Trump is likely to make big concessions to Iran soon. https://t.co/a09MqbLsuk

And naturally, some were hilarious.

Sir, this is a Wendy’s drive-thru. https://t.co/uSFwdHWOGH

The president has invoked the Caps Lock Powers Act https://t.co/1mWUIMwTE6

I tend to switch to decaf by this hour of the day, but maybe that’s me. https://t.co/aMuoyCAAXw

Among democrat politicians, you may notice a theme.

Mr. President, starting a war — or even just a war of words — with Iran won’t save you from Bob Mueller. Besides, you basically made the same threat to KJU before your Singapore meeting and North Korea’s nuclear program is stronger than ever. #MuellerTime https://t.co/Sf3yy58F6g

Are you a tad concerned about this tweet by @realDonaldTrump to Iranian President Rouhani?

If so, support HR 669 / S 200 by @SenMarkey & me. This bipartisan legislation prevents @POTUS from launching a nuclear first strike without Congressional authorization. https://t.co/KwkK9iRbwI

But surely this says it all.