Tucker Carlson Should Follow Mr. Miyagi’s Advice Regarding His Two Careers; Here’s How

Tucker Carlson Should Follow Mr. Miyagi’s Advice Regarding His Two Careers; Here’s How 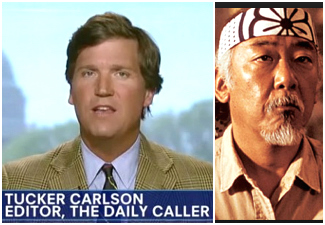 When I think of Tucker Carlson lately, the first person who comes to mind is…Mr. Miyagi.

Looking back on the low-budget film that became an instant classic during the summer of 1984 (a cruel summer, as it were), the biggest takeaways from The Karate Kid in terms of movie-lines-that-guys-quote-every-day came not from Daniel-San or Johnny of Cobra Kai, but the wise custodian/five-foot wrecking machine that was Keisuke Miyagi. Whether it was teaching karate through all-day chores to make the home Dojo sparkle or simple stuff like, “Man who catch fly with chopstick accomplish anything,” Myagi (the late Pat Morita) turned a pretty good flick into an iconic one.

So when it comes to Tucker, it’s hard not to think of the following disclaimer Myagi threw at Daniel-San right before beginning his karate training (courtesy of IMDB):

Daniel: Yeah, I guess so.

“You don’t criticize your employer,” Carlson told Politico in an interview earlier this week, “and that’s kind of 101.” The problem with that perspective? Daily Caller columnists aren’t Fox employees. The two are mutually exclusive.

As Carlson is finding out, he’s trying to walk the middle of a busy highway. And that whole get squish just like grape thing Miyagi describes to his student? Well…that’s happening right now after now-former Daily Caller columnist Mickey Kaus resigned over not being able to take on Fox News. The irony here is that Fox, according to the network itself, told Mediaite on Thursday that criticism from The Daily Caller wouldn’t be a problem. And when applying basic logic, why would it?

FNC gets slammed by other media, Comedy Central, HBO, and/or competitors alike on a regular basis. It also allows its own talent to criticize the network or its talent on its own air and in blogs, which oftentimes makes for good TV. All of that said, a Mickey Kaus column would have about as much effect as an anti-Fox Gabe Sherman book (See: None) in terms of damaging the brand.

Note: Mediaite Founder Dan Abrams has–since day one–allowed his staff to criticize his employers…be it NBC, MSNBC or ABC. My understanding is that has also led to some uncomfortable situations. To that end, when he was anchoring Nightline, he completely distanced himself from operations here to avoid any perceived or actual conflicts (he’s now more involved since he went part-time again at ABC, but still doesn’t direct day-to-day editorial on the site). From what I’ve been told and experienced, he’s never spiked a Mediaite story but to be fair, Abrams is not (nor has ever been) the editor of this publication so its not an apples to apples comparison.

From a personal perspective, there’s no difference whatsoever in what I write about whether Dan is around or not. Never once did I consider his TV career when taking ABC to task or praising it. And ABC—a multi-billion dollar entity under the Disney umbrella—likely doesn’t care much what Joe Concha is thinking either…good or bad.

Since the Kaus resignation, Tucker has seemed to stumble on the PR aspect when explaining his internal policy at The Daily Caller.

Now I believe it’s time for him to make a tough decision:

Continuing hosting a morning show on weekends at Fox News…

Or…if the middle of the road is seen as the only option, he needs to allow his employees to criticize his employer.